The final race of the 2018 Formula 1 season before the summer break takes place this weekend.

Lewis Hamilton heads to the Hungarian Grand Prix as the championship leader following victory at the Hockenheimring last time out.

The reigning world champion has more wins than any other F1 driver at the Hungaroring, but title rival Sebastian Vettel has won two of the last three races at the track.

3Legs4Wheels previews the 12th race of the season:

Vettel converted pole position to race victory at the Hungaroring in 2017, giving the Ferrari driver his second win in three years at the race, but it wasn’t a straight forward win. The German was hindered by steering problems, resulting in teammate Kimi Raikkonen asking to be allowed to pass him, but Ferrari opted to keep Vettel ahead.

Mercedes did use team orders to put Hamilton ahead of Valtteri Bottas, but the Briton wasn’t able to make an overtake on Raikkonen, resulting in Mercedes switching the cars back around on the final lap to give Bottas the final spot on the podium.

It was a difficult race for Red Bull as Max Verstappen collided with teammate Daniel Ricciardo on the opening lap, damaging the Australian’s radiator and ending his race. The incident resulted in an early safety car and saw Verstappen handed a 10-second penalty for causing the collision.

There was an upturn in fortunes for McLaren, as the team secured its first double points finish of the year, with Fernando Alonso also recording the fastest lap of the race.

Williams’ Felipe Massa found himself unable to race after struggling with an ear problem, resulting in the team having to call up reserve driver Paul di Resta last minute. The Scottish driver had been due to be in the commentary box for Sky F1 at the race, but ended up racing in F1 for the first time since the 2013 Brazilian Grand Prix.

The Grand Prix was also memorable for a couple of post-race moments. Alonso reclined on a deckchair under the podium to celebrate the start of F1’s summer break, mimicking the time he watched on from a deckchair in Brazil after his McLaren broke down. An incident late in the race between Nico Hulkenberg and Kevin Magnussen also led to a bizarre clash in the media pen, which saw the Dane invite Hulkenberg to “suck my balls”.

There haven’t been many changes made at the Hungaroring this year, having only been resurfaced a couple of years ago.

Some small amendments have been made around the track though, including the smoothing of kerbs and alterations in the pitlane. The pitlane surface caused problems during last month’s DTM race at the track when drivers came in on slick tyres during wet conditions, resulting in a number of collisions and pit crews being injured.

Pirelli has selected non-consecutive compounds for this race – the medium, soft and ultrasoft tyres, which were also in use at last weekend’s Germany Grand Prix.

Last year, the supersoft tyre was in use in place of the ultrasoft, and proved a popular choice during the race, which was a one-stop race for most drivers. The majority of the field started the race on the supersoft before switching into the softs for the second half of the Grand Prix. 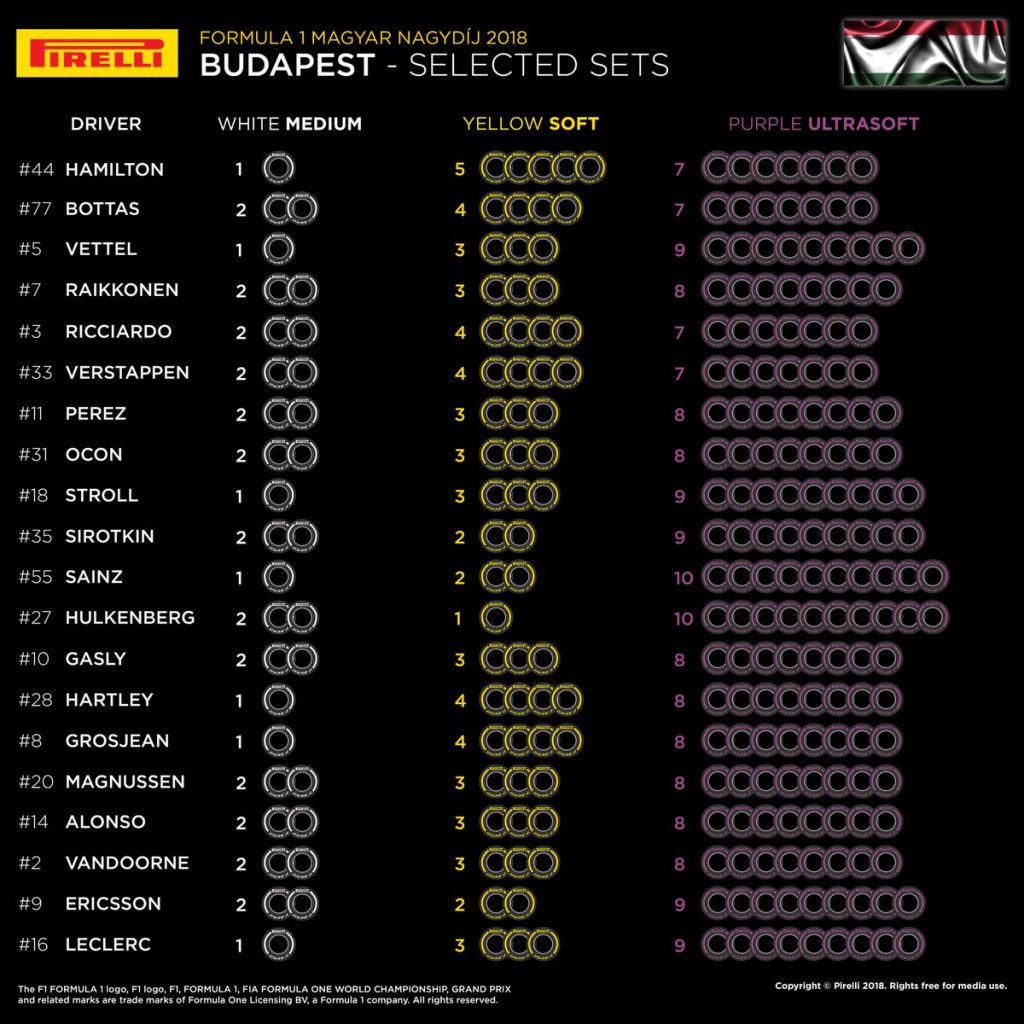 No driver used the medium tyre during the race last year, so the teams haven’t included many sets of the hardest compound for this year’s event at the Hungaroring, with each driver having just one or two sets of the white-striped tyre available.

Mercedes and Red Bull have brought fewer of the ultrasofts to the race than Ferrari. Renault also favour the purple-striped tyre, and are the only team to have 10 sets of the softest compound for the weekend.

Unlike last weekend, it doesn’t look like the intermediates or wet tyres will be needed in Hungary, with dry and sunny conditions forecast for much of the weekend.

Temperatures are expected to reach around 32°C during practice tomorrow, although a few showers are expected overnight into Saturday.

Qualifying is forecast to take place in similar conditions to Friday, while temperatures will increase further to around 35°C during the race. Sunday will also be windier than earlier in the weekend, with gusts reaching around 18mph during the race.

Hamilton may be the most successful driver at the Hungaroring, but no team has dominated at the track in recent years, with four teams winning the last six races. Red Bull have previously said they expect this race to be one of their strongest of the year, but haven’t won at the track since 2014.

Winning this race isn’t usually a good omen for the championship – no driver has won in Hungary and gone on to secure the title since Michael Schumacher in 2004.

Pole position doesn’t necessarily guarantee success at the Hungaroring. Only three of the last 10 races have been won by the driver who set the fastest time in qualifying. Raikkonen has more poles at this track than any other driver with eight, but has won just once. Jenson Button holds the record for winning from the lowest grid position at the circuit, having claimed his maiden F1 win from 14th in 2006 – a feat matched by Hamilton at last weekend’s German Grand Prix.

Renault have indicated they want to confirm their 2019 driver lineup ahead of  the summer break, which could mean they make an announcement over the weekend. There’s been plenty of speculation about the driver’s market over the last week, with talk of Lance Stroll’s dad buying Force India and putting the Canadian there, moving Esteban Ocon to Renault and Carlos Sainz to McLaren as Fernando Alonso’s replacement if he moves to IndyCar next year.

It’s likely to be a sombre weekend at Ferrari following the death of Sergio Marchionne this week. It was only publicly announced that the team’s CEO was ill last weekend, resulting in him being replaced at the company. The team dedicated last Saturday’s pole position to Marchionne, and will surely be keen to pay tribute with another strong performance at this weekend’s race.

You can hear the team preview this weekend’s race on the latest episode of the podcast and see who we expect to be on the podium this weekend. Get in touch through Twitter and Facebook, and join us during qualifying and on race day for our live blogs.

Lewis Hamilton will be looking for his fourth win in five races as F1 heads to Singapore this weekend. The reigning champion has a 30-point lead over Sebastian Vettel at the top of the drivers’ […]

Valtteri Bottas dominated the Australian Grand Prix to win the season-opening race in Melbourne, finishing ahead of teammate Lewis Hamilton and Max Verstappen. The Finn started on the front row alongside Hamilton, who had pole […]