Lewis Hamilton will be aiming to win his third race in a row when Formula 1 heads to Monte Carlo for the Monaco Grand Prix this weekend.

The reigning world champion has a 17-point lead over Ferrari’s Sebastian Vettel ahead of the sixth round of the 2018 season.

The street circuit is one of the hardest tracks to overtake on, but the narrow roads around the principality often result in damage and crashes.

Kimi Raikkonen secured his first pole position in nine years ahead of the 2017 Monaco Grand Prix, but it was his teammate who stood on the top step on race day. Vettel was able to stay out longer than the Finn before coming into the pits, making the overcut work to take the lead, while Daniel Ricciardo secured third, despite brushing a wall late on.

The race saw Jenson Button return to the paddock after stepping away at the end of the 2016 season. The 2009 champion was filling in for Fernando Alonso at McLaren as the Spaniard skipped the race to take on the Indy 500 instead. Button started from the pitlane after taking a hefty grid penalty for new engine parts, and his race came to a premature end when he collided with Sauber’s Pascal Wehrlein, leaving the German’s car on its side up against the wall and resulting in a safety car.

Sergio Perez and Daniil Kvyat were also involved in a collision, forcing Kvyat out of the race and Perez to drop to the back of the field. The Mexican had been trying to pass the Toro Rosso driver on fresher tyres, but the pair ended up making contact at Rascasse.

Having struggled in qualifying on Saturday, Hamilton started from 13th, but made up six places during the race while Romain Grosjean and Kevin Magnussen both finished in the top 10, giving Haas their first ever double points finish in F1.

As a street circuit, few changes have been made to Circuit de Monaco over the years, and there haven’t been any alterations to the layout for 2018, while the race will be the same length as last year, taking place over 78 laps.

The biggest difference to the Monaco Grand Prix for 2018 is tyres. Pirelli have decided this is the race to debut the new hypersoft compound, which offers higher grip and more wear than any of its other options. The pink tyres have only been tested at Abu Dhabi and Barcelona, so the teams are heading into the unknown by using them on the streets of Monte Carlo.

Like most of the European races this year, the Monaco race gets underway later than in 2017. Last year’s edition started at 2pm local time, but F1’s bosses decided to move the race back to 3.10pm. The change means track temperatures could be falling towards the end of the race, which could impact those on worn tyres.

As we’ve already mentioned, this is the race where we get to see the softest of Pirelli’s 2018 compounds in action for the first time. Most drivers have elected to have either 10 or 11 hypersofts available for the weekend, but Mercedes, Haas and McLaren are being more conservative, with just nine sets. 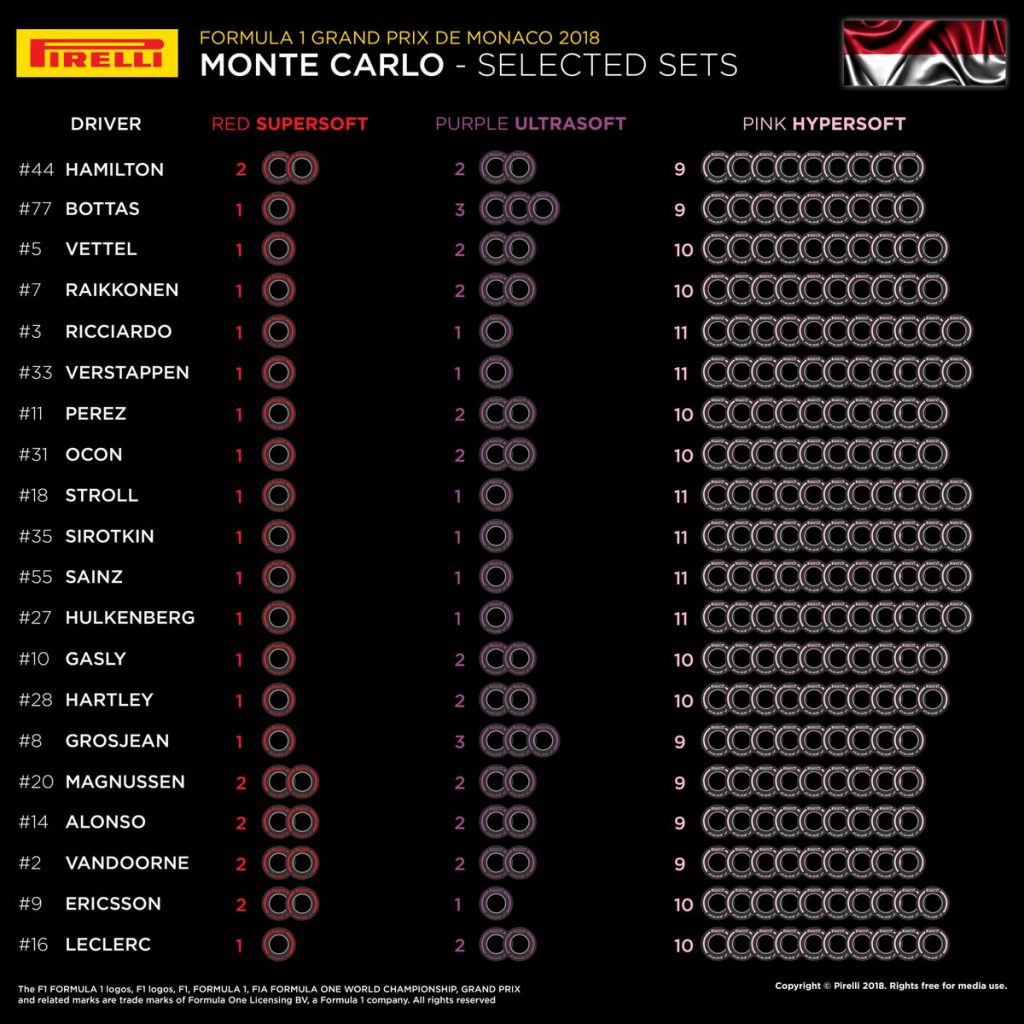 Teams will also be able to use the ultrasoft and supersoft tyres this weekend, making it the first race this year where the soft tyres haven’t been available.

Most drivers that finished in the points last year needed just one pit stop to make it to the end of the race, but Magnussen and Felipe Massa both made up places by making a twp-stop strategy work. The hypersoft should have higher wear than the ultrasoft that most drivers started the race on last year, which could mean earlier pit stops and potentially more cars coming into the pits twice.

It’s not unusual to see rain at Monaco, but it doesn’t look like the intermediate or wet tyres will be needed this year. Practice gets underway a day earlier than usual at Monaco, and the conditions are forecast to be mainly sunny.

Qualifying is set to take place in hot, sunny conditions on Saturday, while Sunday will also be around 24°C. Race day is expected to be cloudy and slightly breezier than during qualifying, although there is a chance of rain after the race, which could mean the temperature drops in the final laps.

Mercedes boss Toto Wolff has played down his team’s chances this weekend, insisting he expects Ferrari and Red Bull to battle for the race win. Mercedes have won four of the last five races in Monte Carlo, but just one of those victories was taken by Lewis Hamilton, who has won just once in the principality since 2009. Hamilton’s teammate Valtteri Bottas has just one points finish in Monaco, and has never been on the podium.

While Mercedes are expected to struggle, Red Bull are typically strong in Monaco. The race gave the team its first podium in 2006, while at least one Red Bull driver has been on the podium in seven of the last eight races on Monte Carlo. Ricciardo has three podiums from his four previous outings in Monaco with Red Bull, but it hasn’t been a happy hunting ground for Max Verstappen, who has just one finish in three races there. 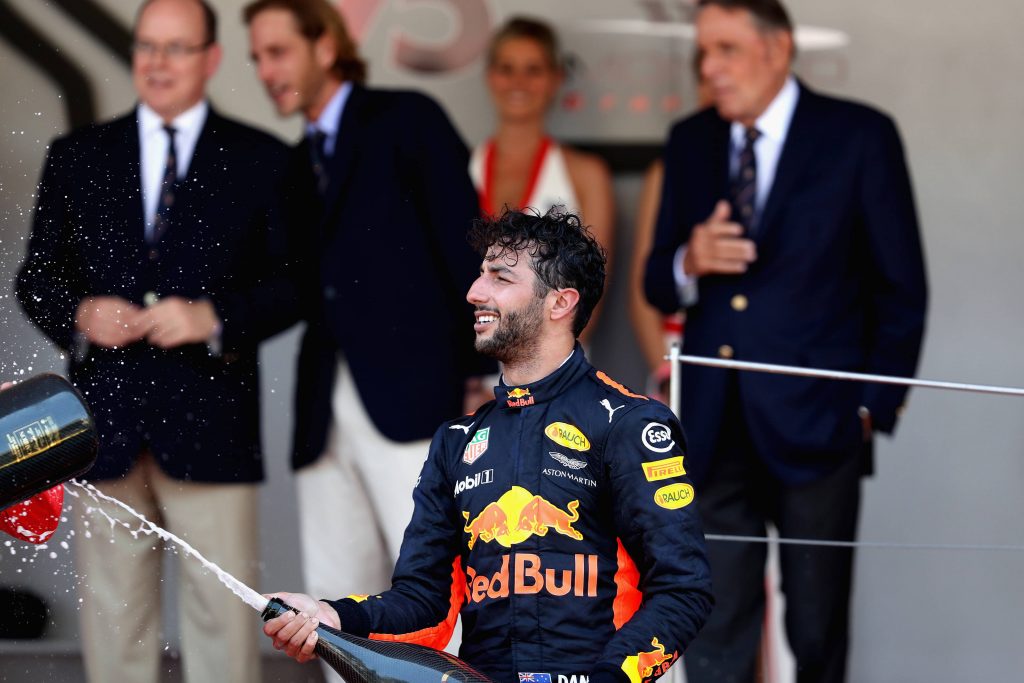 Qualifying is key in Monaco as there are few overtaking opportunities at the circuit. However, the last two pole sitters – Ricciardo in 2016 and Raikkonen last year – failed to convert pole into race victory, and neither have had a pole position since.

The locals will have a Monegasque driver to cheer for for the first time since 1994 as Charles Leclerc prepares for his first F1 race in his homeland. The current F2 champion comes into the race after back-to-back points finishes with Alfa Romeo Sauber, making him the only driver from Monaco to have scored points in more than one F1 race, and the first to score points at a race outside the principality.

Romain Grosjean and Sergey Sirotkin are the only drivers yet to score points this season. Although both drivers have struggled over the last couple of races, there could be a chance for a driver from one of the slower teams to get some points on the board at this race, as there are often a number of retirements in Monaco. Jules Bianchi was able to claim an unlikely ninth for Marussia after starting 21st at the 2014 race, where just 14 cars managed made it to the end of the race. Last year, only 13 drivers managed the full race distance. Grosjean is already at a disadvantage though as he comes into the weekend with a three-place grid penalty for causing a collision at the start of the Spanish Grand Prix.

Don’t forget to check out this week’s podcast to hear what the team think about the race and check out our predictions for Sunday’s podium. Join us during qualifying and the race for our live blogs and let us know what you think through Twitter and Facebook.

Lewis Hamilton made his tyres last to claim victory ahead of Kimi Raikkonen at the Italian Grand Prix this afternoon. The safety car came out on the opening lap of the race after Brendon Hartley […]

Christian Horner has said the points system for Formula 1’s superlicence needs looking into after Red Bull Junior Dan Ticktum was blocked from taking part in a young driver test. Ticktum is currently competing in […]