The 2019 Formula 1 season comes to a close this weekend as the Yas Marina Circuit in Abu Dhabi holds the final race of the campaign.

The drivers and constructors titles are already secured, but there’s still midfield places to be decided in both championships.

This circuit has been on the calendar since 2009, with four of the five previous winners on the grid this year.

3 Legs 4 Wheels looks ahead to the season finale:

It was a fairly comfortable win for Lewis Hamilton to finish the season, having already wrapped up his fifth drivers’ title prior to the trip to the desert.

Max Verstappen made up places off the grid, and held off a late charge from teammate Daniel Ricciardo to secure the final spot on the podium, behind Sebastian Vettel. 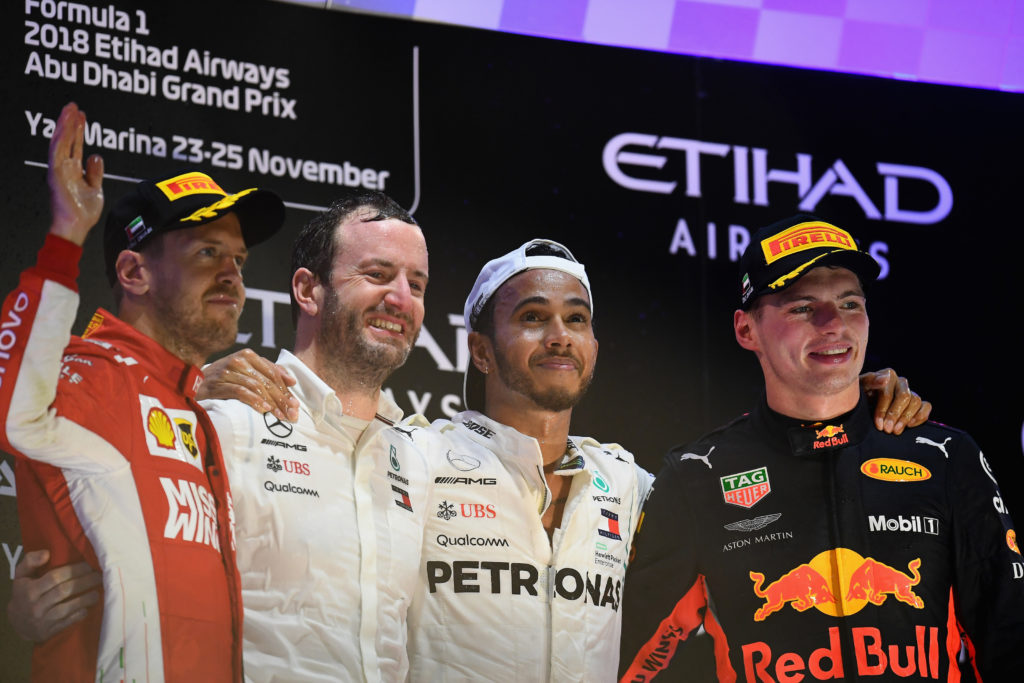 There was early drama when Romain Grosjean collided with Nico Hulkenberg, leaving the German trapped in his upside-down Renault, and there was a virtual safety car shortly after when Kimi Raikkonen’s Ferrari lost power.

Valtteri Bottas lost places late on as both Red Bull cars finished the race on fresher tyres than the Finn, while Esteban Ocon, Marcus Ericsson and Pierre Gasly were all caught out by mechanical issues.

In his final race before stepping away from F1, Fernando Alonso tried to reel in Kevin Magnussen for the final place in the points, but the two-time champion ran wide, resulting in a time penalty to leave him outside the top 10.

The 5.554km Yas Marina Circuit is made up of 21 corners, with drivers lapping the track 55 times during the race.

Lewis Hamilton’s pole time from last year is the outright lap record, but Vettel’s racing record of 1:40.279 has stood since the track’s inaugural race in 2009.

Will @LewisHamilton put on another masterclass in Abu Dhabi? 🚀

He smashed the track record with this lap in 2018 👀#AbuDhabiGP 🇦🇪 #F1 pic.twitter.com/ojClADD86Z

There are two DRS zones, with the first coming on the exit of the turn 7 hairpin, while the second is on the run down the turn 10.

A couple of minor changes have been made at Yas Marina since last year, with a section of the track resurfaced near the start line, and a smaller kerb installed at the exit of turn 20.

Pirelli has brought its three softest compounds to this race, and there’s little variation in the selected sets among the drivers. 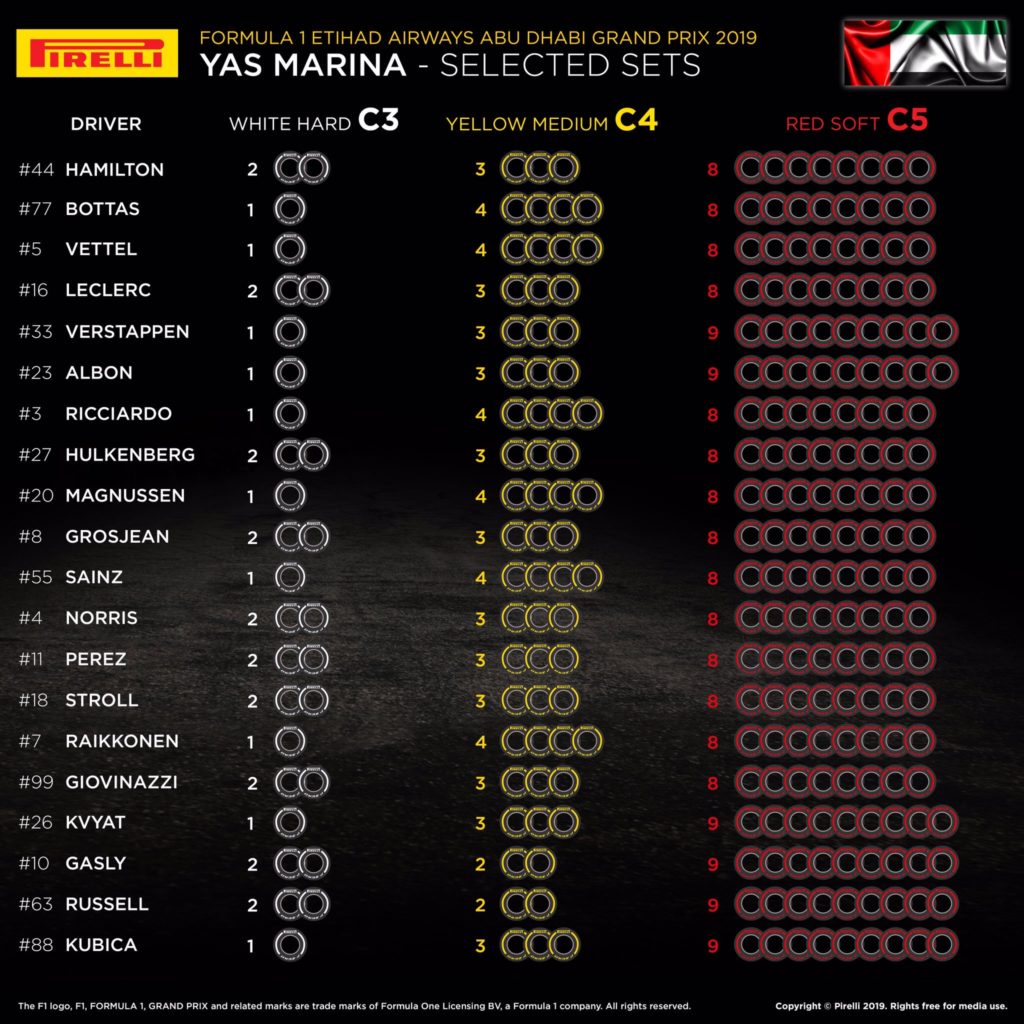 All drivers will have eight sets of softs, expect the Red Bulls, Toro Rossos and Williams cars, who all have nine. There’s a 50-50 split for hards, with all drivers having one or two sets of C3s.

The majority of those finishing in the points started on a softer tyres, before switching to the hardest of the dry compounds available for the race. Most of the front-runners stopped inside the opening 20 laps, but Carlos Sainz picked up quite a few places by staying out longer. Valtteri Bottas was the only driver to do a two-stop strategy, but the Finn had already lost out to the Red Bulls when he came in for a second time, and the new tyres didn’t help him catch those ahead.

Abu Dhabi hasn’t given us too many dramatic moments over the years, but the 2010 race is probably one of the most memorable in the career of Sebastian Vettel.

Fernando Alonso headed into the second race at this track at the top of the drivers’ standings, with Mark Webber his nearest rival for the 2020 title. However, it was third-placed Vettel who put his car on pole position, knowing a win still wouldn’t be enough to give him the crown if his rivals didn’t finish lower down the order.

Webber struggled with his tyres, having a close call with the barrier before having to come into the pits early, but it was Alonso who had the biggest issues. As well as having his own problems running wide, he then got stuck behind Vitaly Petrov, hassling the Russian as he looked for an overtake, but the Lotus driver maintained track position throughout to deny the Spaniard his third championship.

Five drivers have won in Abu Dhabi previously – Hamilton, Vettel, Bottas, Kimi Raikkonen and the retired Nico Rosberg. Hamilton and Vettel are the only multiple winners, taking a combined seven of the 10 previous runnings of this race.

If Vettel is to win his fourth race at Yas Marina, he’ll need Ferrari to provide an Abu Dhabi-winning car for the first time. The Italian manufacturer has never been on the top step at this track, despite it being the home of the Ferrari world theme park. 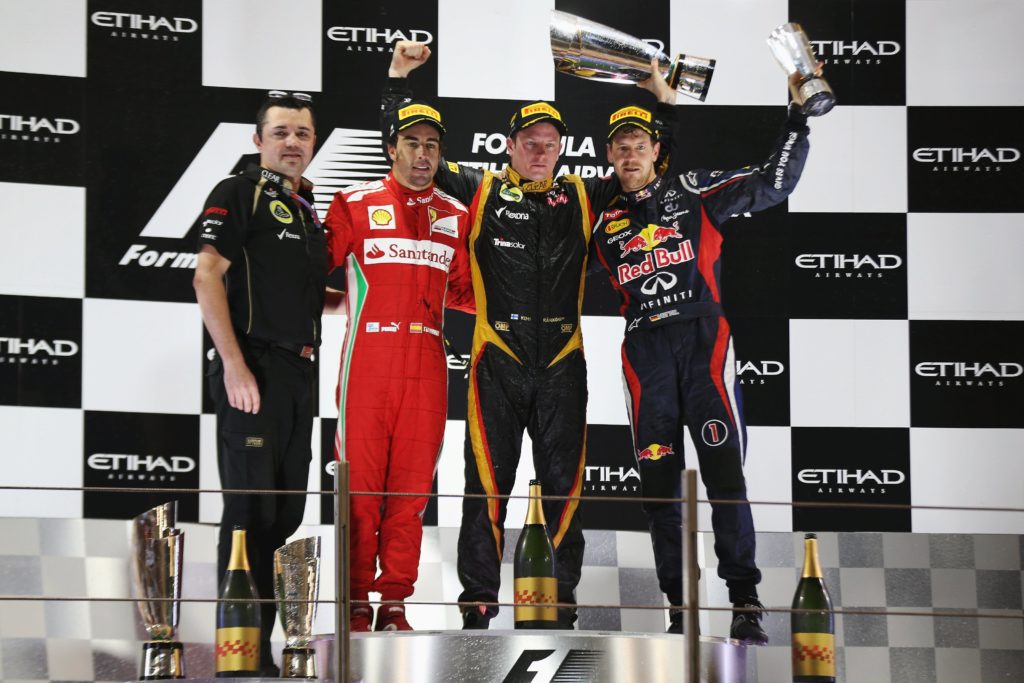 Mercedes have been untouchable at this track in the hybrid era, winning every race and taking every pole position since 2014. However, there’ll be no pole position for 2017 race winner Bottas this time out, as engine penalties mean he’ll be starting from the back of the grid on Sunday.

Only to top three teams have had cars on the podium at this race since 2015, meaning chances of the Toro Rosso and McLaren rostrums seen in Brazil being repeated here are slim. Charles Leclerc and Alexander Albon are the only two of the top six not to have an F1 podium here, but both have done so in F2.

Sergio Perez is one driver who seems to always go well in Abu Dhabi, having finished in the points every year since 2013.

George Russell is the only driver yet to score a point this season, but the Williams driver will have happy memories of this track, with his F2 victory last year handing him that title ahead of Albon and Lando Norris, prior to all three moving to F1.

You can hear more of our thoughts ahead of this race on this week’s podcast, and see who we think will be on the podium on Sunday. You can also submit your predictions for the race, and join us during qualifying and on race day for our live blogs. If you want to get in touch, you can do so through Twitter or Facebook.

Pirelli has published the final selected sets for the 2018 Formula 1 season, confirming which tyres each driver will have available for the Abu Dhabi Grand Prix later this month. There’s little variation among the […]

Lewis Hamilton will start the final race of the 2019 Formula 1 season from pole position after setting a new outright lap record in qualifying at the Yas Marina Circuit. The champion’s time of 1:34.779 […]