One of the most unpredictable races of the last couple of seasons takes place this weekend as Formula 1 heads to Baku.

In just three years on the calendar, the Azerbaijan Grand Prix (which was named the European Grand Prix for its first F1 race) has provided some of the most memorable incidents in recent years.

Three previous trips to the Land of Fire have resulted in three different winners, including a rather opportunistic victory for Lewis Hamilton last year.

3Legs4Wheels looks ahead to this weekend’s action:

After the action-packed 2017 Azerbaijan Grand Prix, last year’s visit to the Azeri capital had a lot to live up to, but it certainly delivered. The safety car was out on the opening lap following an early collision involving Esteban Ocon and Sergey Sirotkin, but pole-sitter Sebastian Vettel maintained the early lead.

The Red Bull drivers battled for fourth and fifth, with Daniel Ricciardo second on the road of the two teammates, but seemingly in the quicker car. The Australian lined up an overtake, but Max Verstappen closed the door, resulting in both cars crashing out of the race on lap 40, and leading to another safety car.

Sergio Perez pitted under the safety car, holding onto fifth place while on new tyres despite having served a time penalty for colliding with Kimi Raikkonen earlier in the race. Romain Grosjean has less success during the second safety car period as he drove into the wall while warming his tyres. The Haas driver tried to blame Marcus Ericsson for the incident, but the Swede’s Sauber was nowhere near the scene.

Bottas had taken the lead while trying a different strategy to his teammate and Vettel, and remained ahead on the restart despite the cars behind him being on newer tyres. Vettel tried to move back ahead of the Finn, but locked up his tyres and ran wide, dropping him to fourth and leaving him with flat spots. Bottas looked to be heading for victory but the earlier incidents in the race left debris on the track and he picked up a puncture with just two laps remaining, promoting Hamilton to the head of the field.

Perez, having been well placed after the safety car, used his newer tyres to get the better of Vettel, giving the Force India driver the only podium finish of the season for a driver not at one of the top three teams.

The Baku City Circuit runs through the narrow streets of Baku, passing some of the city’s more historic buildings. The track combines long straight with tight turns, along with a few opportunities for overtaking.

6.003km or 3.73miles long and with 20 corners, the circuit also has two DRS zones – one immediately after turn two and one after the final corner on the run to the start/finish line.

Given the nature of the street circuit, it’s the same configuration that we’ve seen used here for the last three years, which hasn’t provided too bad a race so far!

For the third time in four races this season, Pirelli has opted for the C2, C3 and C4 compounds at this race –  the same choices that were available for China and Australia. 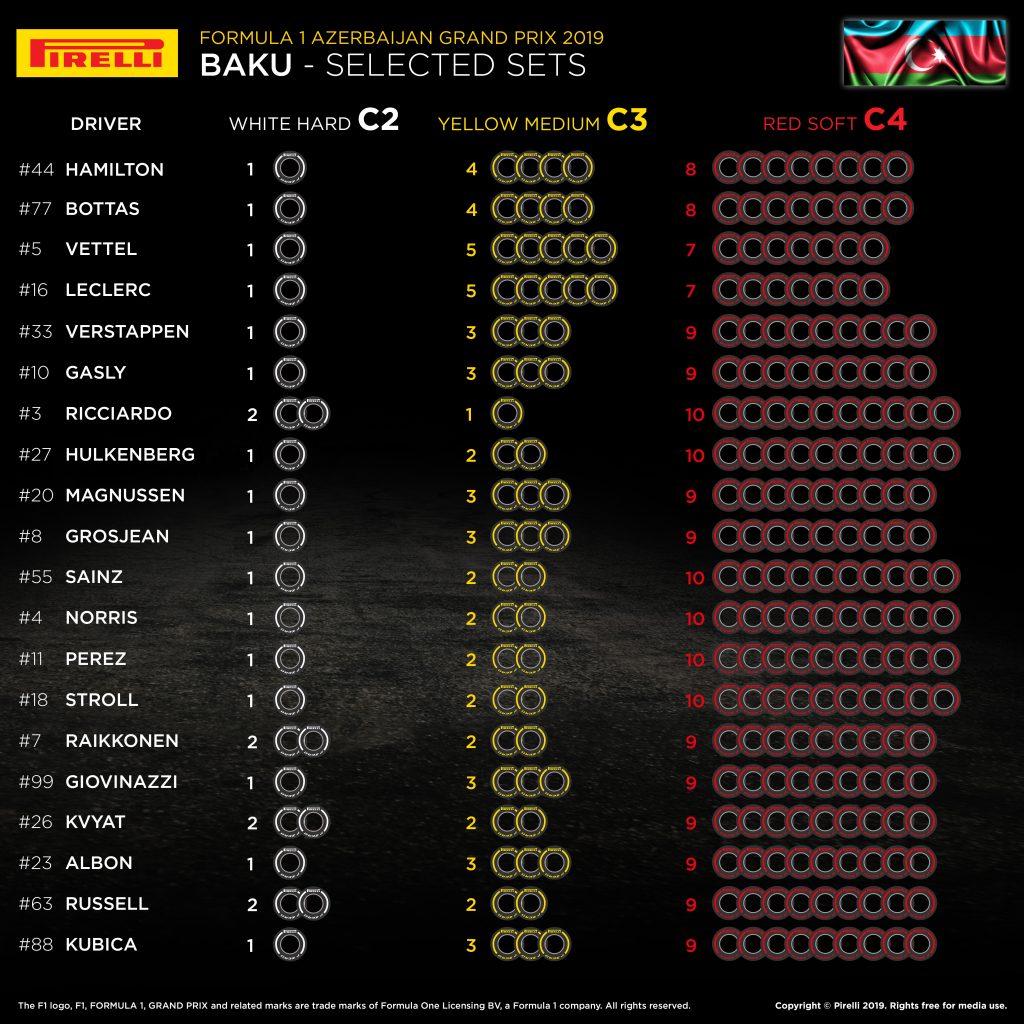 Ferrari appear to be more concerned about tyre wear than any other team on the grid, as they have the fewest soft sets for their drivers, while Renault, McLaren and Force India all appear to be banking on the soft tyre being the best compound for the race.

The softest tyre isn’t necessarily the best option around Baku though. Last year, Perez was the only driver to have a new set of supersofts available for his second stop. All those around him had to go onto the ultrasoft under the second safety car, but his harder set meant he still had life in his tyres to get past the struggling Vettel late on.

There were contrasting strategies in use last year, and different drivers made different tyres work for them. Hamilton used all three dry compounds, while Raikkonen and Perez both went long on the softs, which were the hardest compound on offer, and Carloz Sainz did two lengthy stints on the ultrasofts. Red Bull may have trying a one-stop after Verstappen and Ricciardo both went long on their opening stints on supersofts, but their crash meant we didn’t get to see how that panned out.

Despite this race’s short history, there’s plenty to chose from here! The one that stands out above them all? Hamilton and Vettel’s collision(s) under the safety car in 2017.

The Ferrari driver went into the back of Hamilton, who had complained about the safety car driving too slowly, leaving him with front wing damage. The four-time champion complained that Hamilton had “brake tested” him, and pulled up alongside the Brit to show his displeasure, before driving into the side of the Mercedes.

The team’s data showed Hamilton didn’t apply his brakes at all ahead of the first contact, and the stewards handed Vettel a 10-second stop and go penalty for driving dangerously. He was later made to do community service by the FIA.

There was more back luck for Hamilton later in the race, as his headrest was left loose after a red flag period, forcing him to come into the pitlane for the team to fix it, ultimately helping Daniel Ricciardo to an unlikely victory after the Red Bull driver started in 10th.

Pole position is as difficult to predict as the race itself in Baku. In three years, there have been three different pole sitters, with only Nico Rosberg in the inaugural race converting his to a win on the Sunday. None of the pole sitters at any of this year’s race have gone on to take victory at the same race though.

Hamilton probably heads into the race as the favourite, having won the last two races. However, last year’s winner is yet to finish the following year in Azerbaijan, with Rosberg retiring from F1 after his 2016 win and Ricciardo crashing out of the race last year. To finish first, first Hamilton must finish.

While Mercedes have been in dominant form so far this year, and Vettel has looked out of sorts at Ferrari, Charles Leclerc could be a threat at this race. Having been cruelly denied by late engine trouble in Bahrain, he’ll feel he’s owed a win, and has previously gone well in Azerbaijan, securing an emotional win just after his father’s death during his F2 championship-winning season in 2017, before adding an impressive sixth with Sauber last season in just his fourth F1 race. Bottas could also be out to make amends having lost out on the win last year through no fault of his own.

Given the high chance of some retirements at this race, it is one of the few opportunities for a team from the midfield to threaten the podium. Sergio Perez has two top-three finishes with Force India in Azerbaijan, while Lance Stroll became F1 youngest ever podium-finisher with Williams in 2017. Perez remains the only driver to have been on the podium twice in Azerbaijan.

There have been 18 retirements in three years in Azerbaijan, meaning those who can avoid incidents and simply get the car around have a decent chance of picking up points at this race. Five drivers are yet to get off the mark this year – the Williams pair of Robert Kubica and George Russell, Sainz, Grosjean and Alfa Romeo’s Antonio Giovinazzi. Sainz seems to like this track, having secured a fifth last year, but Haas have admitted they’re expecting to struggle while still getting to grips with how their car responds to this year’s tyres.

You can check out our podium predictions for this weekend’s race and let us know who you think will be in the top three by taking part in our prediction league.

Join us during qualifying and on Sunday for our live blogs, and tell us what you think of the action via Twitter or Facebook. If you haven’t already, you can listen to more of our thoughts ahead of the 1000th race on this week’s podcast.

The FIA has announced it won’t be reviewing the decision of the stewards at the Azerbaijan Grand Prix to give Sergey Sirotkin a three-place grid penalty for Barcelona. Williams submitted a request for right of […]

Formula 1 heads to Baku for the third time for this weekend’s Azerbaijan Grand Prix. Red Bull’s Daniel Ricciardo will be hoping for back-to-back wins after victory at the Chinese Grand Prix, as well as […]

Charles Leclerc will start the Azerbaijan Grand Prix on pole position after setting the best time in an action-packed qualifying in Baku. The session was disrupted by four red flags, including one at the end […]