Valtteri Bottas heads to the second race of the 2019 Formula 1 season as the championship leader following an emphatic win in the opening Grand Prix of the campaign in Australia.

The Finn will be aiming to win back-to-back F1 races for the first time in his career at this weekend’s Bahrain Grand Prix.

Sebastian Vettel and Lewis Hamilton are the only current drivers to have won at Sakhir.

Vettel started the race from pole position, and went on to seal his fourth Bahrain victory in seven years. He came under pressure from second-placed Bottas late in the race, but the Mercedes driver was unable to make the overtake. 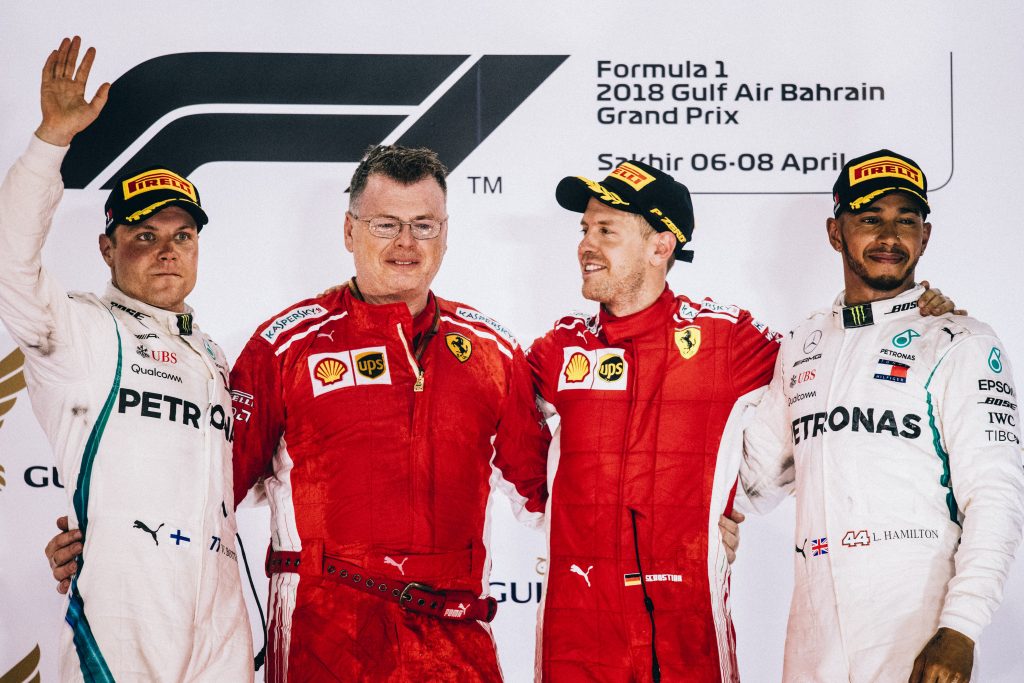 The German was struggling with tyres in the final laps as Ferrari were unable to bring him in for a second pitstop due to an incident during Kimi Raikkonen’s second tyre change. The Ferrari driver struck Francesco Cigarini while leaving his pit box, leaving the mechanic with a double leg fracture and the pit crew a man short.

Raikkonen’s retirement from the race meant Hamilton claimed the final spot on the podium despite having taken a five-place grid penalty due to an unscheduled gearbox change.

Neither Red Bull driver was classified for the first time since the 2010 Korean Grand Prix after Daniel Ricciardo and Max Verstappen both retired within the opening two laps.

It was a better day for now-Red Bull driver Pierre Gasly though, as he finished a career-best fourth in just his second ever F1 race after an impressive performance in qualifying.

Since the Bahrain International Circuit opened in 2004, there have been three different layouts used. The current Grand Prix Circuit is 5.412km or 3.363 miles long, with 15 turns.

In 2010 the longer Endurance Circuit was used, but that’s the only time that configuration has been used, while the current layout is 5 metres shorter than the version used for the first ever F1 race at Sakhir.

Limitless! The region’s biggest and most anticipated sporting and entertainment event will be taking place from the 28th – 31st of March, don't miss out!#F1 #BahrainGP 🇧🇭 pic.twitter.com/1DuRvqJoPw

Vettel set a new outright lap record during qualifying last year, but the racing lap record of 1:31.447 was set back in 2005 by then-McLaren driver Pedro de la Rosa.

Bahrain is a track that typically presents some overtaking opportunities, and that could be increased this year as a third DRS zone has been added on the run down to turn four.

Pirelli’s hardest compound for 2019, C1, makes its debut at this race as the hard tyre, while C2 is the medium and C3 is the soft. This means the tyres are one step harder than used in Australia. 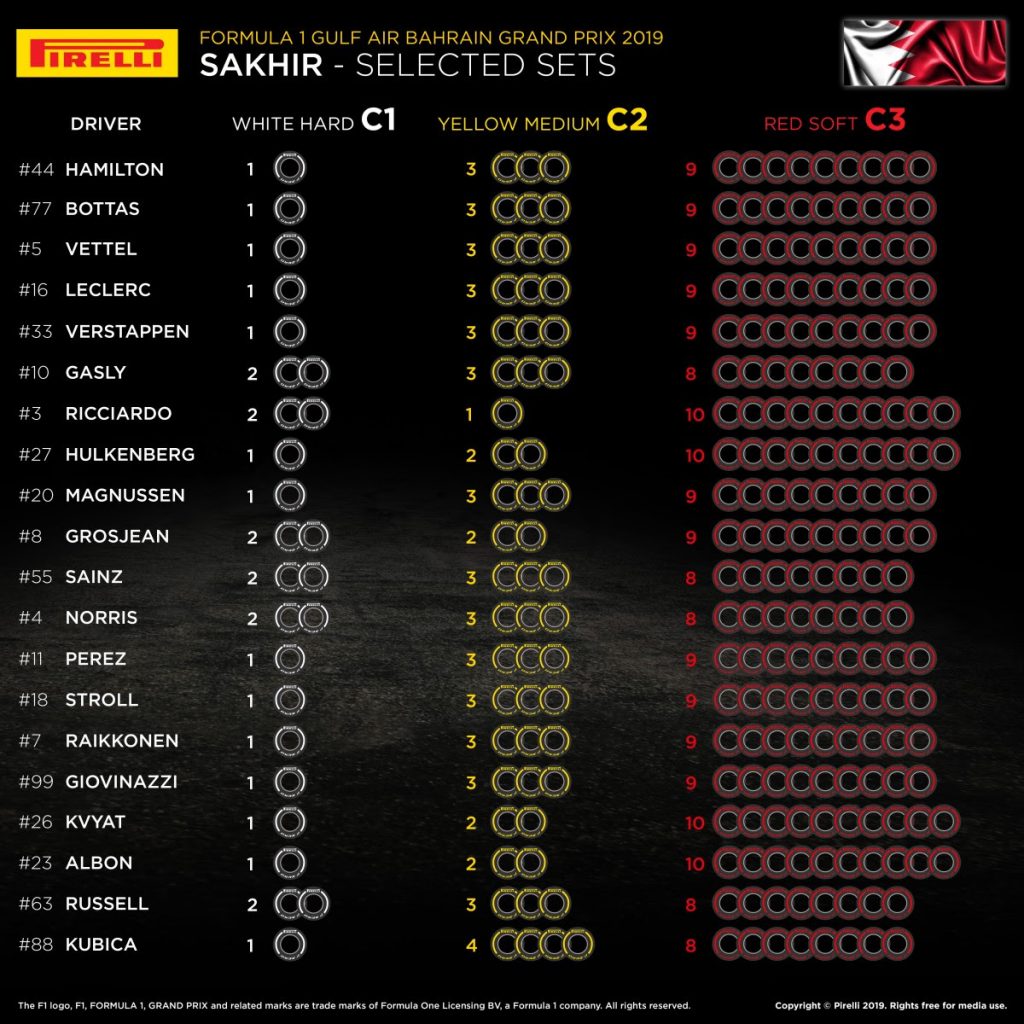 Renault and Toro Rosso appear to have the most aggressive tyre choices for this race, with both teams selecting 10 sets of softs with their drivers, while every other driver will have eight or nine sets of the C3 compound for the weekend.

Most drivers needed two stops to complete the 57-lap race distance last year, although the top three all made a one-stop strategy work. However, Ferrari’s hand was forced by the Raikkonen pitlane incident, which in turn meant Mercedes needed to keep their drivers out to keep them in with a chance of catching the German driver.

Two of 3Legs4Wheels‘ favourite drivers to mock, Pastor Maldonado and Esteban Gutierrez has a spectacular crash at the 2014 Bahrain Grand Prix, with the Venezuelan’s Lotus launching the Mexican into the air as the Sauber came out the pitlane.

Gutierrez’s car rolled twice before coming to rest the right way up, although the debris caused by the collision meant the safety car had to be deployed.

Gutierrez insisted he was ahead of the Lotus and had the racing line, but Maldonado claimed the Mexican missed his braking point which caused the two cars to collide. The stewards didn’t see it that way though as Maldonado had to serve a 10-second stop and go penalty after being judged to have caused the incident, and after the race was handed a five-place grid drop for the next race and three penalty points.

It was an eventful race for Maldonado, who had also been involved in a collision with Jean-Eric Vergne earlier in the day, leaving the Toro Rosso driver with a rear puncture.

The incident is also remembered for Gutierrez’s radio call, as he exclaimed “Whoa! What was that?” after his car came to rest, obviously unclear as to how the incident had come to happen. After walking away from the car, he was checked over at a local hospital before being given the all clear.

Bahrain is strictly Vettel territory, with the Ferrari driver winning four times in the last seven visits to this track, including the last two years with the Italian team. Hamilton is a two-time winner in Bahrain, but hasn’t stood on the top step since 2015.

Bottas will be hoping to maintain his dominant form from Australia, and this is a good track for the Finn. He has outqualified Hamilton since joining Mercedes, claimed his first career pole here and narrowly missed out on the win last year.

As dominant as Red Bull were during Vettel’s four-year title winning charge, the team has never had its best races at Sakhir. The German is the only Red Bull driver ever to stand on the podium in Bahrain, doing so once in 2009 in addition to his back-to-back victories for the team in 2012 and 2013. Last year’s double DNF was Red Bull’s second in Bahrain after David Coulthard and Mark Webber both failed to see the chequered flag in 2007. Max Verstappen’s Bahrain record doesn’t bode well for Red Bull, as the Dutchman has finished just once in his four previous appearances at this race.

Haas’s Kevin Magnussen was the highest finisher from outside the top three teams in Melbourne, and the American team will be hoping to stake a claim for best of the rest again this weekend. Bahrain has been a good track for Haas since they entered F1 in 2016, scoring points on every occasion, including fifth-placed finishes in 2016 and last year. Romain Grosjean will have particularly fond memories of Sakhir, with two of his eight F1 podiums coming at this track.

Sergio Perez could also be a strong contender from the midfield, with the Mexican having finished all seven of his previous appearances at this race, including a third in 2014, while Robert Kubica’s only career pole position came in Sakhir during the 2008 season.

We’ve made our podium predictions for this race, with some variety from the podcast team. Let us know who you think will be on the rostrum on Sunday by taking part in our prediction league. No-one predicted a Bottas victory in Australia, so it’s wide open!

Don’t forget to join us during qualifying and on race day for our live blogs, and tell us what you think about the action through Twitter or Facebook. You can hear more of our thoughts on this week’s podcast episode.

Lewis Hamilton won a disrupted Bahrain Grand Prix, after the drivers spent more than an hour in the pitlane following a fiery high-speed crash by Romain Grosjean. The Haas driver was taken to hospital with […]

Lewis Hamilton made it two wins out of two for Mercedes in 2019 as he secured victory at the Bahrain Grand Prix ahead of teammate Valtteri Bottas, while Charles Leclerc secured his first podium finish […]

Max Verstappen started the Bahrain Grand Prix from pole position, but it was Lewis Hamilton who came away with the victory, holding off late pressure from the Red Bull driver. Hamilton’s teammate Valtteri Bottas completed […]