Reigning champion Lewis Hamilton heads to the 9th race of the season with a 36-point lead over teammate Valtteri Bottas in the drivers’ standings, and looking for his fifth straight win.

However, the Austrian Grand Prix proved to be a difficult race for Mercedes last year, with Red Bull’s Max Verstappen taking the win in front of his team’s home supporters, as well as the huge travelling Dutch support.

Since returning to the F1 calendar in 2014, there have been four different winners in five races at the Red Bull Ring.

3Legs4Wheels looks ahead to the trip to Spielberg:

The Mercedes cars started the race on the front row, while main rival Sebastian Vettel started down the order due to a grid penalty, but it wasn’t to be comfortable win the Silver Arrows might have been expecting.

Bottas started on pole, but a poor start dropped him back before a hydraulics issue and gearbox failure forced him to retire. Things got worse for Mercedes later in the race when a fuel problem ended Hamilton’s day, giving the team just their third double retirement since returning as a constructor in 2010. 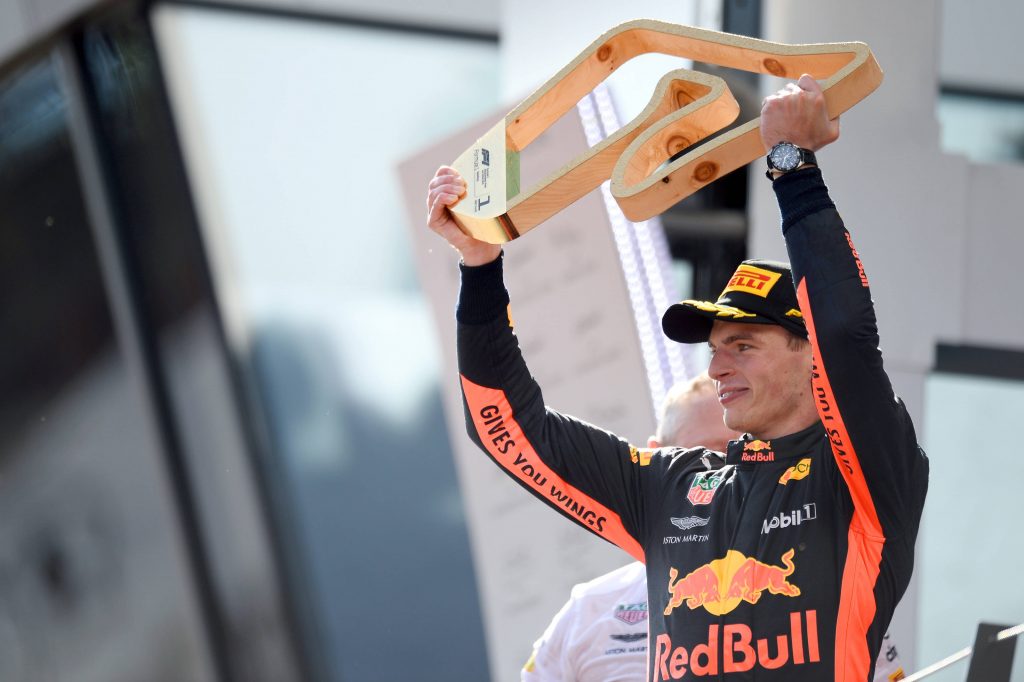 Mercedes weren’t the only ones to suffer mechanical issues, with Nico Hulkenberg, Daniel Ricciardo and Brendon Hartley all failing to see the chequered flag, while a collision cut Stoffel Vandoorne’s race short.

Hamilton’s hopes of winning the race were dealt a blow before his fuel issue though, as the team didn’t pit the Briton during a virtual safety car period, while the rest of the leaders did come in for fresh tyres, forcing Hamilton to stop later and drop him back to fourth.

Verstappen made the pass on Kimi Raikkonen early in the race for P3, promoting him to race leader after Bottas’s retirement and the pitstops. It was also a good race for Haas, who finished 4th and 5th. The result gave the team their best points finish ever, while Romain Grosjean finished in the top 10 for the first time in 2018.

The Red Bull Ring, previously known as the Osterreichring and A1-Ring, is one of the shortest tracks on the current calendar. At 4.318km long, it’s the fourth shortest in distance, but it’s long straights and just 10 turns make it the shortest in terms of time needed to complete a lap. 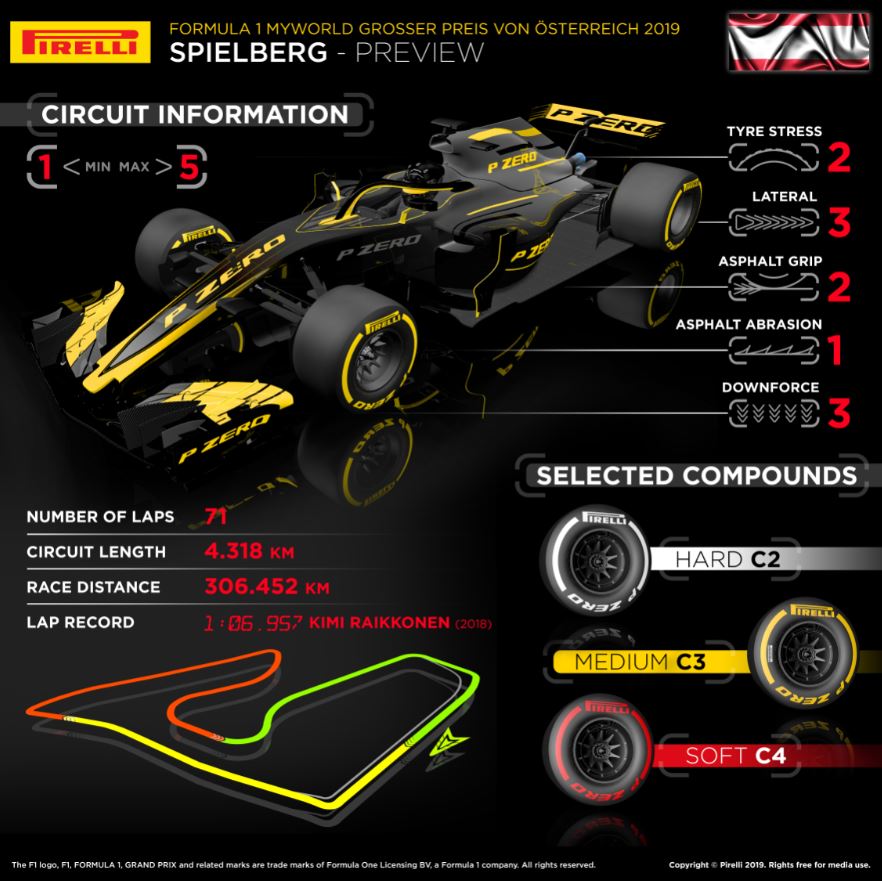 The track remains more or less unchanged from last year, but there are some minor alterations to kerbs and runoff areas around the ring.

There’s some variety for this race, with each of the top three teams taking different approaches. Mercedes are banking on the soft tyre last well, while Ferrari are more conservative, bringing two fewer sets of the C4 compound for Vettel and Charles Leclerc, and Red Bull are splitting their tyre strategies. 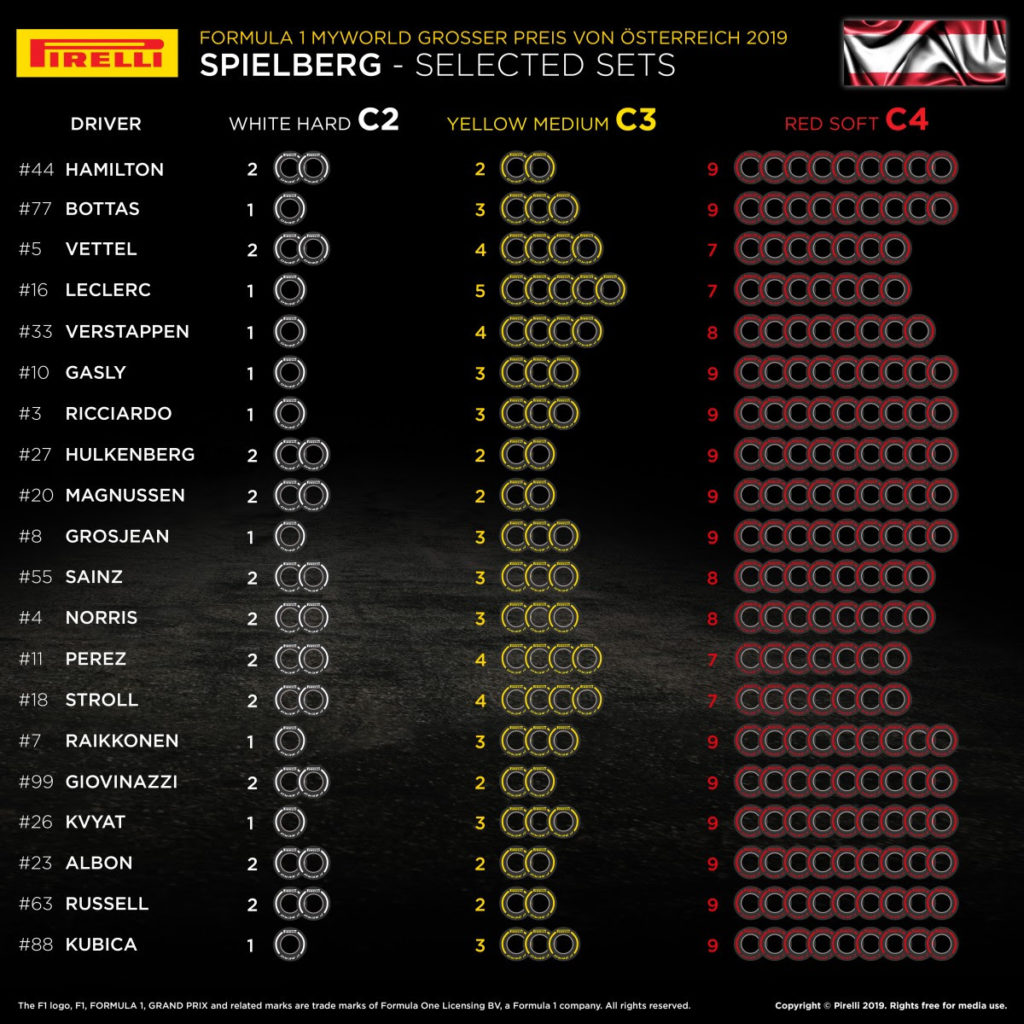 Leclerc has more medium compound sets than any other driver of the grid, while no driver has more than two sets of hards, despite the softer compounds proving tricky for some drivers at the French Grand Prix.

Last year, every driver that finished in the points needed just one pitstop, with the majority starting one the supersoft or ultrasoft before switching to the softs, which were the hardest compound being used at that race.

The 2002 Austrian Grand Prix is best remembered for Ferrari’s team orders, with the team switching Rubens Barrichello and Michael Schumacher on the final lap to give the German the win.

The result was better for Ferrari for the drivers’ championship, but didn’t please the Austrian fans, who booed during the podium, despite Schumacher insisting Barrichello stand on the top step instead.

The FIA later fined the team $1million for the way the incident played out. Following that race team orders were banned, although that rule has since been scrapped following the “Fernando is faster than you” incident between Fernando Alonso and Felipe Massa at the 2010 German Grand Prix.

We’ve already mentioned there have been four winners in five races since this track returned to the F1 calendar, but four of those races have been won by one team – Mercedes. Max Verstappen’s 2018 success broke the Silver Arrows’ monolpoly at this track, with Bottas, Hamilton and Nico Rosberg all previously enjoying success here.

Austria’s long straights mean it’s typically a track that suits cars with the best engine, and despite Mercedes’s dominance this season, it’s still thought the Ferrari is the quickest car in a straight line, which could give Vettel and Leclerc hope of ending their winless start to the campaign.

Only two of the five races at this configuration of the Red Bull Ring have been won by the pole sitter, while Verstappen won this race after starting from fourth in 2018.

Having won every race so far this season, and the final two of the 2018 campaign, Mercedes have the chance to equal McLaren’s modern era record of 11 straight wins, which was set in 1988 (the outright record is 14, set by Ferrari in the 1950s, excluding Indianapolis).

It’s a big race for Kimi Raikkonen. Barring any major issues, this will be his 300th race start in F1, having recorded three DNSs during his career. Raikkonen may be the oldest driver in the 2019 field, but he’s showing no signs of slowing down. He’s currently eighth in the standings, just seven points behind Carlos Sainz in the battle to be the best of the rest. His 7th in France matched Alfa Romeo’s best finish so far this season.

Don’t forget to hear our thoughts ahead of this race on this week’s podcast, and check out our predictions for Sunday’s podium. You can also take part in our predictions league, and join us during qualifying and on race day for our live blogs. Let us know what you think through Twitter or Facebook.

Formula 1’s triple header continues this weekend as the Austrian Grand Prix takes place at the Red Bull Ring. It will be the fifth running of the Spielberg race since the track returned to the […]

Lewis Hamilton ended both Friday practice sessions at the top of the timesheets at the Austrian Grand Prix in Spielberg. The Mercedes driver was just ahead of teammate Valtteri Bottas, who won last year’s race […]