It’s the penultimate round of the 2019 Formula 1 season his weekend, as Interlagos hosts the Brazilian Grand Prix.

Lewis Hamilton wrapped up his sixth world championship last time out, meaning both the drivers’ and constructors’ titles have been decided already.

Max Verstappen looked on course to take his first win at the circuit after taking the lead early on, but it was as he was lapping backmarkers his race came undone. Esteban Ocon tried to get back ahead of the Red Bull driver despite being a lap down, and ended up collecting the Dutchman, allowing Lewis Hamilton to move ahead.

Ocon and Verstappen clashed again after the race when Verstappen angrily confronted the Frenchman in the FIA garage, resulting in the sport’s governing body issuing the Dutch driver with a two-day community service order.

Mercedes struggled with tyre degradation throughout the race, which had given Verstappen the lead over Hamilton, while Bottas found himself unable to defend against Daniel Ricciardo.

In his penultimate race for Red Bull, the Australian pushed hard for a spot on the podium, despite starting down the order after an engine penalty, but Kimi Raikkonen had just enough pace to keep Ricciardo behind.

Romain Grosjean finished eighth as both cars finished in the top 10 for Haas, despite the French driver coming together with Marcus Ericsson early in the race, while Charles Leclerc was the top finisher from outside the top three teams for Sauber.

Autodromo Jose Carlos Pace at Interlagos has hosted Formula 1 since 1972, taking a break in 1978 and from 1981 to 1989 when Jacarepagua held the Brazilian Grand Prix.

The track is 4.309km long, and is made up of 15 corners. A few minor changes have been made since last year, with a new kerb at the apex of turn four as well as alterations to the drainage at that part of the track, plus grooves added at turn 14. However, the layout is essentially unchanged from 2018.

Two DRS zones are available during the lap. The first is detected at turn 2 and can be used after the exit at turn 3. The second comes later in the lap, with a detection point after turn 13 for deployment heading to turn 15.

Pirelli is bringing its hardest three dry compounds to this race, and after last year’s graining issues it’s not really a surprise to see Mercedes looking towards the medium tyre. The constructors’ champions and McLaren have both gone with fewer softs than the rest of the teams, giving Hamilton the most medium sets of any driver on the grid. 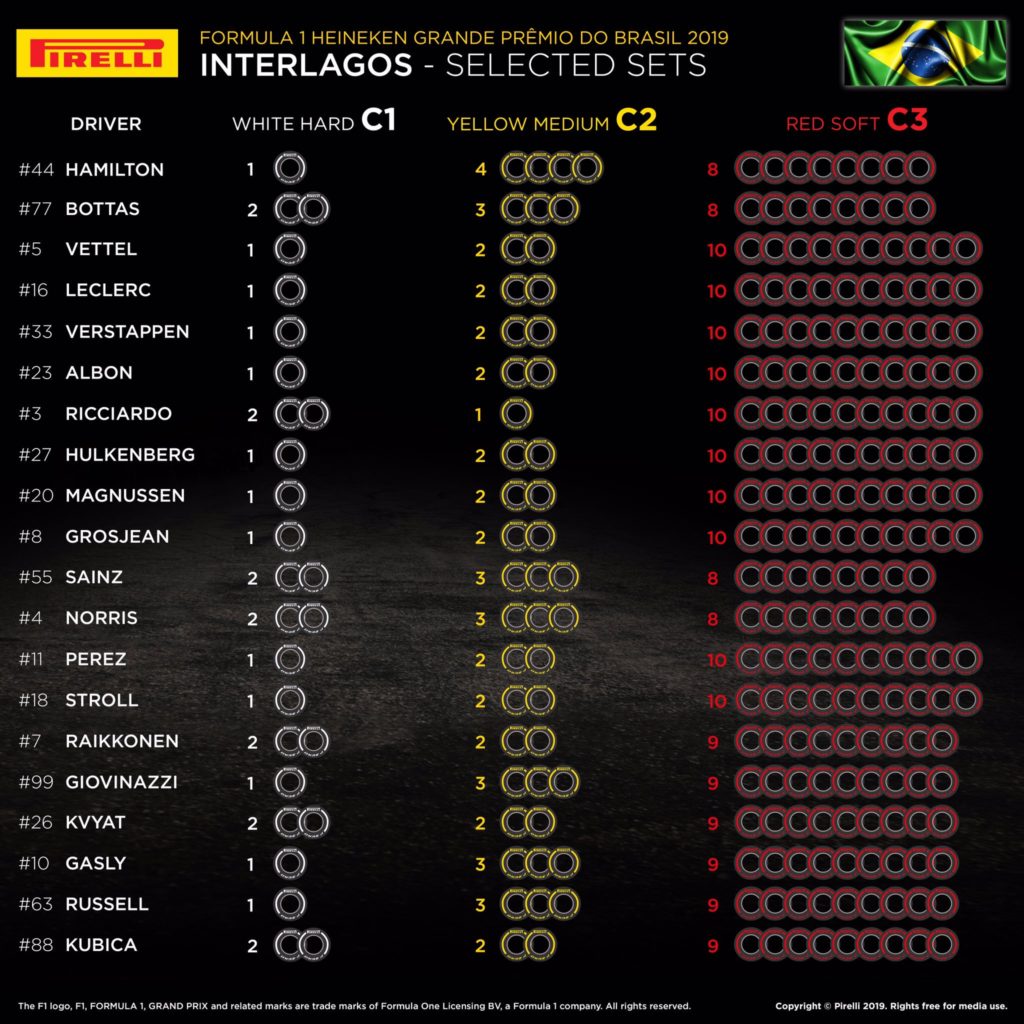 The other front runners, Red Bull and Ferrari, both have two extra softs, but all four drivers have just one set of hards.

Last year, Verstappen appeared to be on to the winning strategy by managing his first set of tyres early on and ensuring he was on fresher tyres than those around him. Without his incident with Ocon, the Dutchman seemed to be on for the victory. Only two drivers in the top 10 made a second pitstop, as Vettel and Bottas both struggled to make their rubber last.

Interlagos is one of those tracks that’s thrown up many a memorable moment over the years, but few stand out more than Ayrton Senna’s 1991 victory on his way to his third and final drivers’ title.

Despite the Brazilian’s huge success in F1 to that point, his home race had always been something of a disappointment, with three retirements and a disqualification in his first five appearances in front of the Brazil fans.

When Interlagos returned as Brazil host in 1990, Senna was on the podium, but the top step remained elusive. The following year, he opened up a huge lead, but it looked like he was going to miss out again when his McLaren got stuck in sixth gear. Despite that issue, Senna found the physical and mental strength to get the car to the chequered flag ahead of the rest of the field.

Ferrari made a strong start after the summer break, but Mercedes are well and truly back at the front of the field on Sundays, with the team winning the last four races. The trip to Texas also saw the Silver Arrows end a seven-race streak without a pole position.

Three drivers that will be racing this weekend have won here before – Hamilton, Raikkonen and Vettel. The German has the best record of the trio, with three previous victories at Interlagos, but Hamilton has taken both of his wins in the last three years, while Mercedes have won four of the last five Brazilian Grands Prix.

Raikkonen hasn’t scored any points since before the summer break, but has been on the podium in Brazil more times than anyone else on the current grid, so should be confident he can end that run here. Another driver who’ll be full of confidence is Alexander Albon, who comes into this race knowing he’ll still be a Red Bull driver next season. His impressive run since moving up to the main team mid-season sees him hold the second-longest points scoring streak on the grid, behind only Hamilton.

Bottas has never led a lap in Interlagos, but he has been on pole position at this race, as has Nico Hulkenberg. The German’s sole career pole came back in his debut season with Williams. In what looks set to be his penulimate race as an F1 driver (at least for now). This is typically a strong track for the German, who has scored points at every Brazil appearance except for last year, when en engine problem ended his perfect record.

Qualifying looks likely to be vital for those hoping to be on the top step this weekend, with the winner starting on the front row in the last 11 races in Interlagos.

The weather could have a big role to play this weekend. It looks like most of Friday’s running will be done in the wet, with possibly a light shower on Saturday. Verstappen has shown he can find pace around Interlagos in the wet.

Don’t forget to join us for qualifying and on race day for our live blogs, and check out this week’s podcast for more of our thoughts ahead of this race, as well as a look at the 2021 regulations with tech expert Craig Scarborough. You can also join in our predictions game, and see who we think could be on the rostrum on Sunday. Let us know what you make of all the action by getting in touch on Twitter and Facebook.

Lewis Hamilton has been handed a five-second time penalty for causing a collision with Alexander Albon late in the Brazilian Grand Prix. The decision moves Carlos Sainz up to third, dropping the 2019 champion down […]

Just one race after wrapping up the drivers’ title, Mercedes were celebrating again as Lewis Hamilton’s Brazilian Grand Prix victory helped the team wrap up the constructors’ race. The race will perhaps be best remembered […]

Verstappen on pole position at Interlagos

Max Verstappen will start the Brazilian Grand Prix from pole position after dominating performance in qualifying at Interlagos. The Red Bull driver’s time of 1:07.508 was 0.123s faster than second-placed Sebastian Vettel, who couldn’t match […]