The final race before the summer break takes place this weekend as Formula 1 heads to the Hungaroring for the Hungarian Grand Prix.

The 12th round of the season comes following the action-packed race at the Hockenheimring, which saw Max Verstappen pick up his second win of the campaign, while both Mercedes drivers struggled.

Valtteri Bottas, Pierre Gasly and both Renault drivers will be among the seven drivers looking to bounce back after retiring last time out.

Lewis Hamilton started the race from pole position, and never came under threat during the race, with teammate Bottas dropping down the order as Ferrari found a better tyre strategy.

Bottas remained ahead after pitting before Sebastian Vettel and Kimi Raikkonen, but on fresher tyres both were able to comfortably pass the Mercedes before the end of the race.

The Finn dropped further when he was caught by Daniel Ricciardo, who started the race in 12th. As the Australian tried to pass Bottas for fourth, the two drivers came together, with the Mercedes man found to be at fault, resulting in a 10-second time penalty.

Toro Rosso enjoyed one of their best results of the season as Pierre Gasly finished 6th, while Haas secured just their second double points finish of the campaign.

The Ferrari team wore block armbands throughout the weekend following the death of former chairman Sergio Marchionne ahead of the race.

Fresh from his best finish of the season at Hockenheim, Robert Kubica is looking forward to Hungary ⏩

Several small changes have been made ahead of this year’s race though, including the addition of a domed kerb behind the existing kerb at the exit of turn five.

The circuit includes two DRS zones sharing one detection point just before turn 14. Drivers will be able to open their rear wings after the final corner of the lap and heading out of the turn one.

Three drivers will have more medium compound tyres than any others – Lewis Hamilton and the two Red Bull drivers. 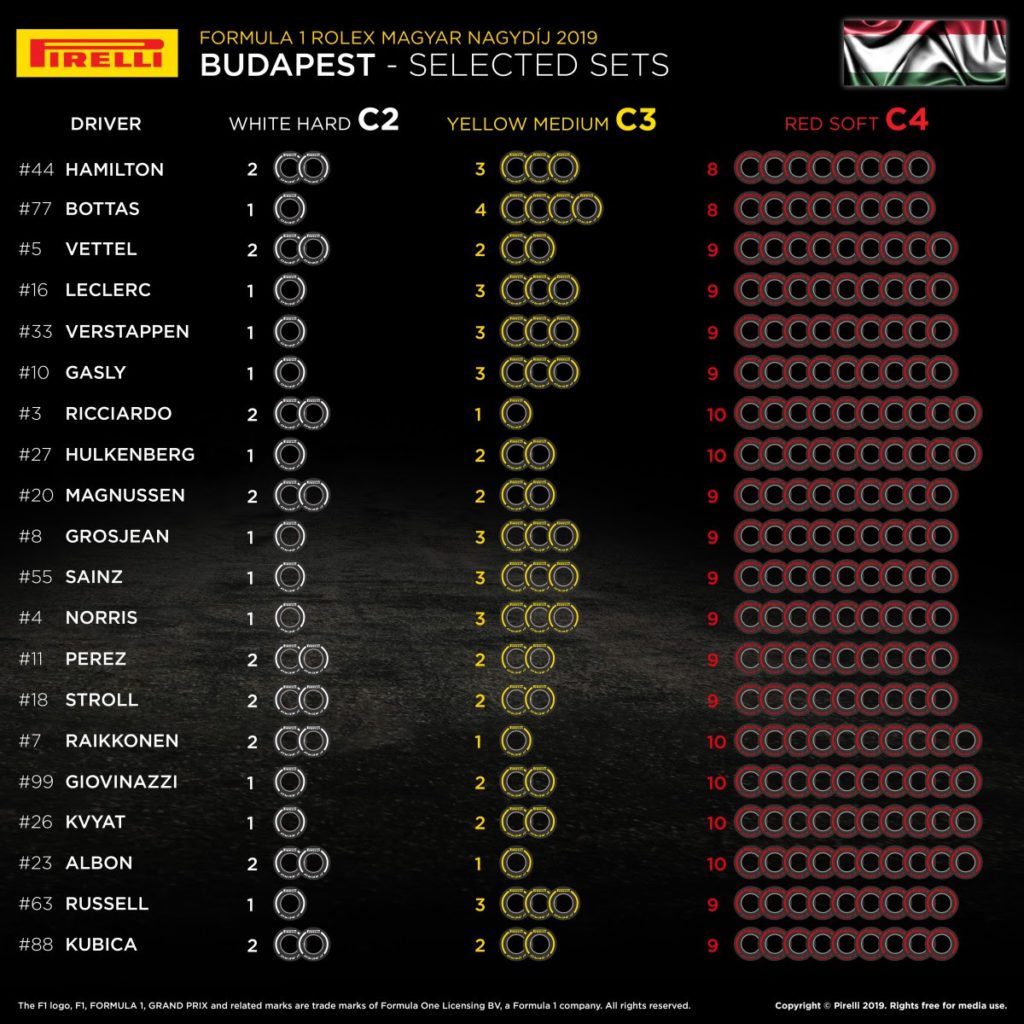 That decision means Ferrari will have an additional set of softs compared to the other front runners, while Renault and Toro Rosso both have 10 sets of the C4 Pirelli rubber.

Last year, most drivers managed to complete the race distance needing just one trip through the pitlance, but Raikkonen made a two-stop strategy work to secure a spot on the podium. The two softest compounds were the preferred options, with few drivers putting on the mediums, which were the hardest tyre in use in Hungary in 2018.

Hungary has a habit of throwing up unusual results, but few would have predicted Jenson Button to win the 2006 race after lining up from 14th on the grid.

For the first time in 22 runnings at the Hungaroring, proceedings took place in wet conditions, with Schumacher and Fernando Alonso challenging polesitter Raikkonen in the early stages. However, Button made the right tyre call under a safety car to move up to second, ending a six-year wait for his maiden win in F1.

113 races into his Formula 1 career, Button gave Honda their first win as a constructor in 39 years, and the last for a Honda-powered F1 car until Verstappen’s victory at the Austrian Grand Prix last month.

Form in Hungary is a difficult one to judge. In the last 11 years there have been six different winners, with four previous winners on the grid this year. McLaren are the most successful team at this track, with 11 victories, while Mercedes have won three of the last six visits to the track.

McLaren do come into this race on a good run, having had one car in the top six for the last four races, with Carlos Sainz’s fifth-placed finish last time out giving the team their best result of the season so far.

Four drivers have taken their maiden F1 wins at this track, while Daniil Kvyat secured his first podium in Hungary in 2015.

Max Verstappen comes into this race in strong form, having won two of the last three Grands Prix, with top five finishes at every race so far this season. However, the Dutchman has never finished on the podium in Hungary, and retired early last year after suffering an engine failure.

By contrast, Kimi Raikkonen has an excellent record at the Hungaroring, with nine podium finishes in 16 appearances, although he has just once race victory.

If you haven’t already, listen to this week’s podcast to hear our thoughts ahead of this race, and see who we’re expecting to see on the podium on Sunday. Let us know who you think could be in the top three and join us for a live qualifying and race day blogs. Share your thoughts on the action with us through Twitter or Facebook.

Formula 1 heads into its four-week summer break following the 12th round of the season at the Hungaroring. Lewis Hamilton’s seventh career win at the Hungarian Grand Prix leaves him 62 points clear at the […]

Lewis Hamilton will start from pole position at the Hungarian Grand Prix, with teammate Valtteri Bottas joining him on the front row. Hamilton’s title rival Max Verstappen will start from third on soft tyres, having […]

The final race of the 2018 Formula 1 season before the summer break takes place this weekend. Lewis Hamilton heads to the Hungarian Grand Prix as the championship leader following victory at the Hockenheimring last […]