It’s Formula 1 after dark this weekend as Singapore hosts the sport’s original night race at the Marina Bay Street Circuit.

Lewis Hamilton has a 63-point advantage at the top of the drivers’ standings, but it’s Ferrari’s Charles Leclerc who heads into the 15th round of the season after securing back-to-back wins in the first two events after the summer break.

Five different teams have won in the 11 previous editions of this race.

3 Legs 4 Wheels looks ahead to the Singapore Grand Prix.

On the face of it, last year’s Singapore Grand Prix wasn’t a classic, with the top six finishing in the same order they lined up on the grid – Hamilton taking the win ahead of Max Verstappen with Sebastian Vettel in third. 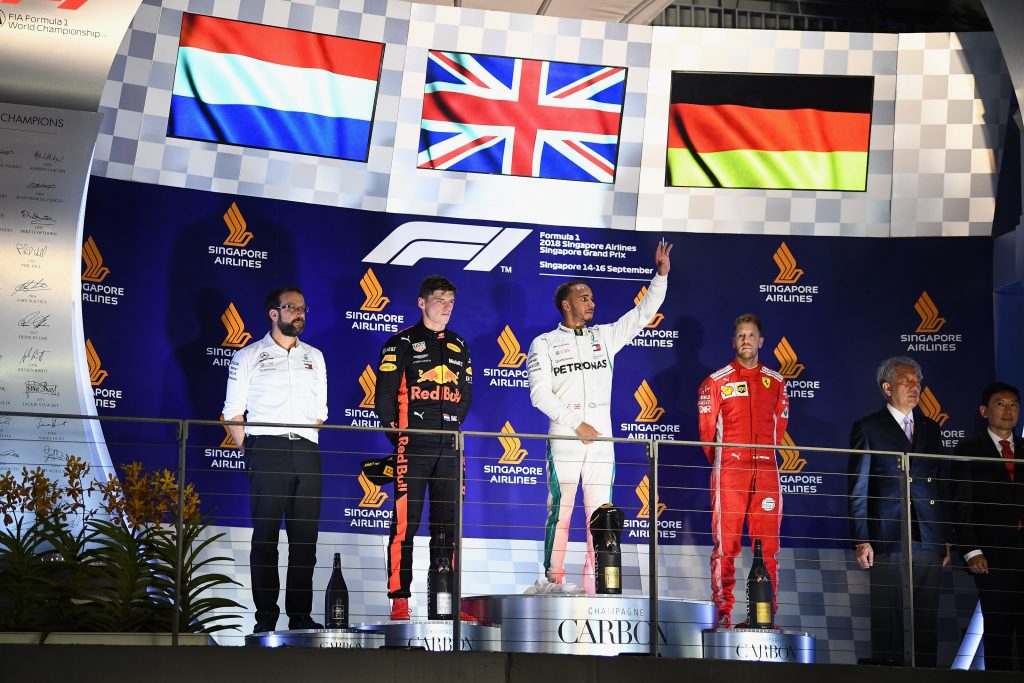 However, the German had given his hopes of denying Hamilton a fifth title a boost early in the day when he passed Verstappen on the opening lap before a collision between Force India teammates Sergio Perez and Esteban Ocon brought out the safety car.

Ferrari pitted Vettel earlier than the race leader and put him on softer tyres than his rival, leaving Hamilton and Verstappen with better rubber towards the end of the race.

Hamilton’s only real difficulty came when Romain Grosjean got in the way while being lapped, allowing Verstappen to close the gap in the second half of the race, but the Briton was able to re-establish his advantage once he’d cleared the Haas, who was later penalised.

Fernando Alonso, Carlos Sainz and Charles Leclerc all scored points after starting outside the top 10 thanks to mistakes from those in front of them, while Ocon was the only retirement of the race.

For a street circuit, Marina Bay has undergone a few changes over the years, including the removal of the Singapore Sling chicane. Last year, the track had turns 16 and 17 reprofiled, making the track slightly shorter at 5.063km.

Will anyone stop him in qualifying next Saturday? ⏱#F1 #SingaporeGP 🇸🇬 pic.twitter.com/EeN050VOja

This year’s tweaks haven’t been as drastic, but the track has been resurfaced in a number of places, including from the end of the pitwall through to the exit of turn 1. There are also new domed kerbs at the exit of turn seven.

A third DRS zone has been added to the track for this year. As well as the section coming out of turn 5 and heading across the finish line, drivers will now be able to use DRS between turns 13 and 14.

Kevin Magnussen set the fastest lap in last year’s race, making him the lap record holder on the newer configuration of this track.

The new track surface and hot temperatures seem to have led to some difference of opinion over what the best tyre strategy will be for this race. Pirelli will be using its three softest compounds for the event – the C3, C4 and C5 tyres. 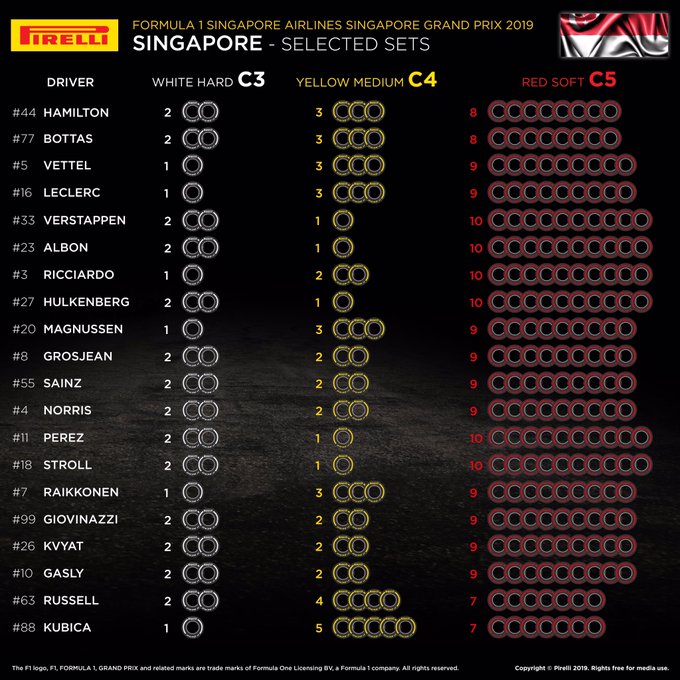 The three front-running teams have each gone with a different number of softs for their drivers, but Williams have made perhaps the boldest move of all, going with just seven of the C5 tyre, giving George Russell 5 sets of mediums. Red Bull, Renault and Racing Point are each banking on the softs lasting the distance, with 10 sets of the red striped tyre.

Last year, most drivers made just one pitstop. Those who started on the hypersofts generally switched onto the softs (the hardest tyre being used at last year’s race) within the opening 20 laps. Vettel and Daniel Ricciardo tried the ultrasofts, but the German’s went away too quickly, while the then-Red Bull driver ran out of time to catch those ahead of him after pitting later.

The cars that made up places in the race all started on ultras before switching to softs, although this may have been more down to other drivers in front of them making errors rather than the strategy itself.

Singapore has a 100% record of safety cars because there’s always a crash. The most memorable of them all wasn’t down to driver error though – it was done deliberately to help a teammate.

Nelson Piquet Jr made his mark in F1’s first trip to Singapore, hitting the wall at the exit of turn 17 back in 2008, resulting in a safety car that helped Renault teammate Fernando Alonso take victory, despite starting the race from 15th.

After being dropped by the team the following year, the Brazilian revealed the crash was done on purpose to boost the two-time champion’s hopes of winning the race, resulting in bans from F1 for team boss Flavio Briatore and engineering head Pat Symonds, as well as a two-year suspended disqualification for Renault – although these bans were later overturned in court.

Some have hypothesised that Piquet’s crash ultimately cost Felipe Massa the drivers’ title in 2008, as the then-Ferrari man had been leading the race prior to the safety car, going on to finish 13th while his title rival Lewis Hamilton came 3rd.

We’ve already mentioned one of the most important stats for Singapore – 11 out of 11 previous races at this track have seen the safety car deployed. Making the right strategy call can make or break a race around Marina Bay, so it’s as important for those on the pit wall to have a good race as well as the drivers.

Renault, Mercedes, McLaren, Ferrari and Red Bull have all won at Singapore since its introduction to the calendar, but only four drivers have stood on the top step, and they’re all world champions. Hamilton and Vettel are the only drivers on the current grid to be victorious at this event, along with Nico Rosberg and Alonso.

Mercedes have been the team to beat in recent years, winning four of the last five Singapore Grands Prix, but Red Bull always go well here too, having had at least one car on the podium in all but two previous races here, including three victories.

Qualifying in Singapore is vital – eight times in the last 10 years the race winner has started from pole position. As Virtual Stat Man Sean Kelly told us on this week’s podcast, the last three races have seen no change in the top three positions from grid to chequered flag. This is bad news for Valtteri Bottas, as the Finn has never started in the top three at Singapore.

The circuit is expected to favour the Red Bull car this year, but it could be a tough ask for Alexander Albon. He’s impressed in his first two races with the team after his mid-season seat swap with Pierre Gasly, but the rookie has never driven at this track before. He did score points at Monaco for Toro Rosso though, and was a race winner in Baku in F2 last year, so does seem to like a street circuit.

If you haven’t already, give this week’s podcast episode a listen as Virtual Stat Man Sean Kelly joins us for a stat-filled look ahead to the race, and make sure you join us during qualifying and on race day for our live blogs. You can also let us know who you think will be on the podium and see who we’re predicting for the top three. Get in touch through Twitter or Facebook to let us know your thoughts throughout the race weekend.

Vandoorne to give 100% in final McLaren races

Stoffel Vandoorne has insisted he’ll give everything in his final races with McLaren, despite being dropped by the team from next year. McLaren confirmed last week that Lando Norris will replace the Belgian from 2019, […]

Charles Leclerc will start the Singapore Grand Prix from pole position after Max Verstappen had to abort his final flying lap at the Marina Bay Street Circuit. Rain earlier in the day meant the track […]

Charles Leclerc will start on pole position for a third straight race after setting the pace in qualifying at the Singapore Grand Prix this afternoon, with Lewis Hamilton alongside him on the front row. Sebastian […]