Mercedes will be looking to maintain their 100% record at the sixth race of the 2019 Formula 1 season this weekend as the sport heads to Monte Carlo for the Monaco Grand Prix.

Things are done a little different in the Principality – FP1 and FP2 are already complete, with F1 taking its traditional break on Friday due to a historical public holiday.

The reigning constructors champions and the paddock as a whole come into this race in mourning following the death of the team’s former non-executive chairman and three-time F1 champion Niki Lauda earlier this week.

3Legs4Wheels looks ahead to the race:

Two years after a pitstop error robbed him of victory, Daniel Ricciardo took victory in Monaco despite his Red Bull being under power. His MGU-K failed midway through the race, and he lost his top two gears, but the Australian was able to hold off Sebastian Vettel. 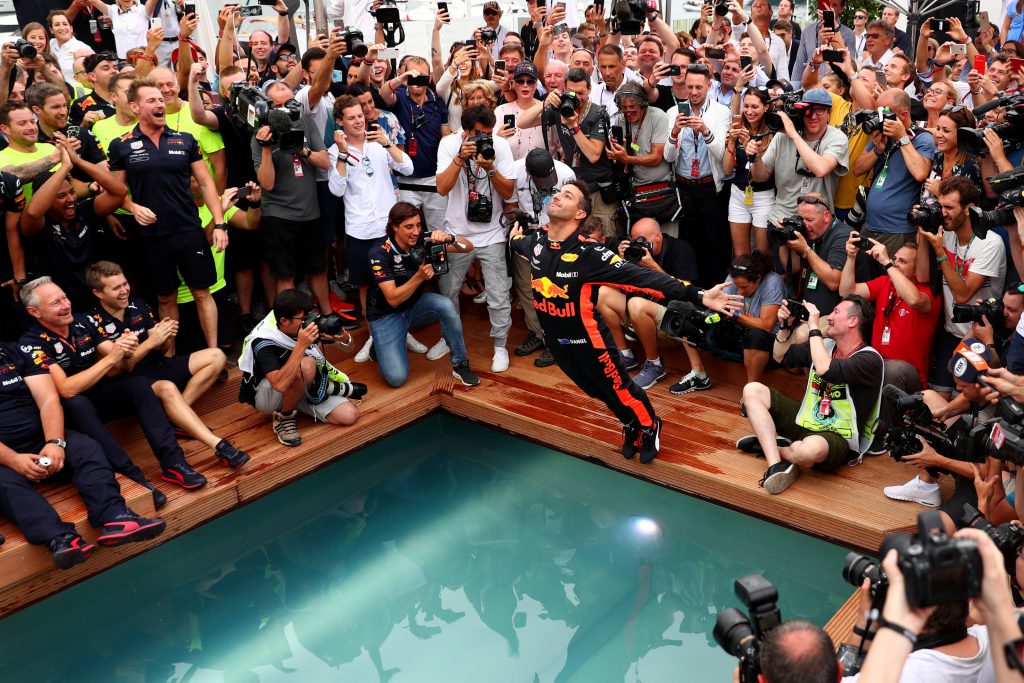 There was disappointment on the other side of the Red Bull garage as Max Verstappen had to start from the back of the grid due to missing qualifying following a heavy crash in FP3. He fought is way back through the field to finish ninth though, despite the street circuit being notoriously difficult to overtake on.

Nico Hulkenberg was the only other driver starting outside the top 10 to finish the race in the points, fighting his way up from 11th on the grid to eighth.

Monegasque driver Charles Leclerc suffered a brake failure eight laps from the end, resulting in him colliding into the rear of Brendon Hartley’s Toro Rosso, taking both drivers out of the race. Fernando Alonso was the only other driver to retire from the race, with a gearbox problem ending the McLaren driver’s day early.

Circuit de Monaco comprises 19 turns and a total length of 3.337km, making it the shortest track on the current calendar.

The F1 layout has undergone a few revisions over the years, with the current layout having been used since 2015. Verstappen is the current race lap record holder at the circuit, posting a time of 1:14.260 last year.

With few straights and the short length of the track, Monaco has just one DRS zone. The detection point is after turn 16, with drivers able to use DRS over turn 19 on the run to the start/finish line.

As a street circuit, Monaco has hazards such as manhole covers and few runoff areas for drivers to contend with.

This is the first time Pirelli will use its new C5 compound at a race – the softest rubber available for 2019. Ferrari and Red Bull are hoping this is the best tyre for the track, having opted to bring 11 sets of the softs for this race, while Force India and Williams have both gone slightly more conservative. 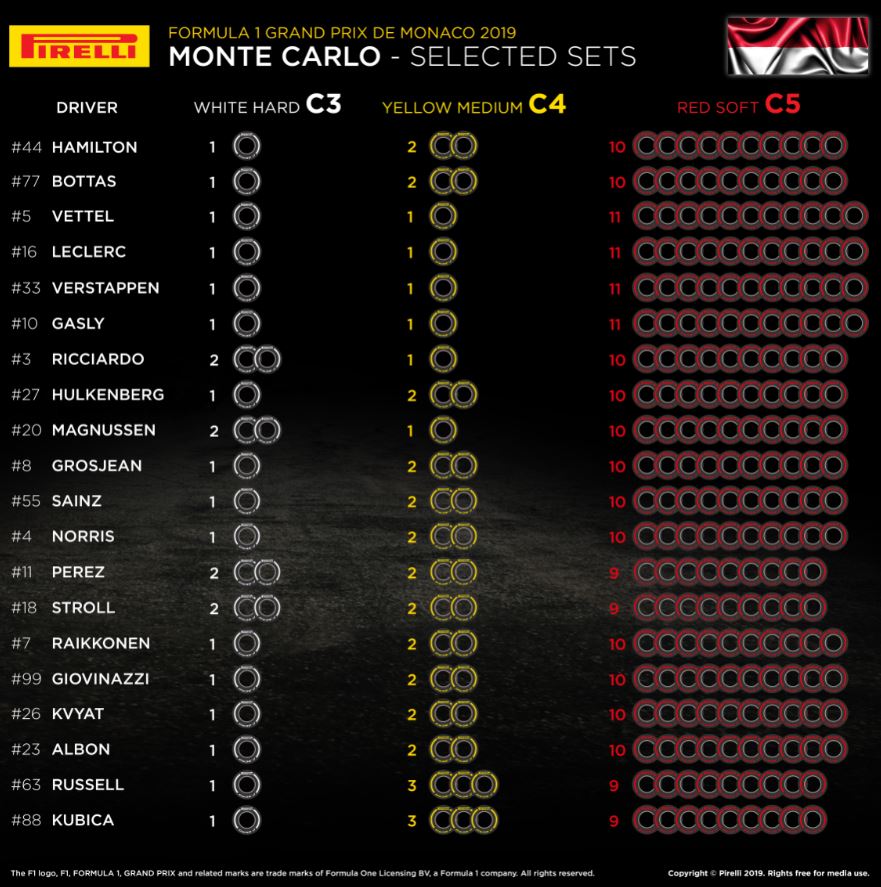 Last year, most drivers needed just one pitstop in Monte Carlo. The top six drivers all started on the softest tyre before stopping once between laps 12 and 17 – they all finished the race in the same position they started in.

Hulkenberg made the alternative strategy work, starting on ultrasofts before switching into the softed hypers in the second half of the race. Only drivers who finished well outside the points made more than one trip through the pitlane.

Ayrton Senna remains the most successful driver in Monaco, winning the race six times in seven years between 1987 and 1993. He had many impressive moments during those years in the Principality, but perhaps his finest moment came in qualifying for the 1988 race, when a breathtaking lap gave him pole, setting a time 1.4s faster than teammate Alain Prost.

The lap was never caught on camera, but McLaren teamed up with Codemasters to reconstruct it last year, on the 30th anniversary of the lap:

Sadly, that performance was followed by another iconic moment – Senna crashing while leading the race before storming away from his stricken McLaren and into his nearby apartment. It was the only time he didn’t win the race during the seven-year spell.

With overtaking typically at a premium in Monaco, pole position can be vital for those hoping to finish at the sharp end of the race. Since 2002, the pole sitter has always maintained the lead during lap 1, while Ricciardo proved last year that even a limping car with track position can be enough to win in Monte Carlo.

Four drivers on the current grid have won here before – Hamilton, Vettel, Ricciardo and Daniel Ricciardo. At most tracks on the current calendar, Hamilton tends to rank near the top for overall wins, but at Monaco he’s been on the top step just twice, with his victories coming eight years apart. The last four races have seen four different winners, with Nico Rosberg and Fernando Alonso the only drivers to record back-to-back wins in Monaco since Michael Schumacher in 1994 and 1995.

The tight street circuit lined with Armco means crashes are likely at this race. Max Verstappen may look like the closest challenger to Mercedes this season, but he crashed out of his first appearances in Monaco, and ruined his race before it began with his FP3 shunt last year.

Ricciardo certainly enjoys this track, with four podiums in the last five years, although he probably doesn’t have the happiest memories of 2016 after being denied the win. Last year’s winner will need more than a little bit of luck if he’s to find himself in the top three again this year. Renault struggled in FP1 and FP2, with only the Williams and Force India’s Lance Stroll slower.

Ferrari’s customer teams come into this race with some upgrades, as both Haas and Alfa Romeo cars have taken new internal combustion engines, turbochargers and MGU-Hs for this race. McLaren have also fitted a new energy store to Carlos Sainz’s car after he missed the majority of FP1.

From what we’ve seen in practice so far, there’s little to suggest there’ll be much of a challenge to Mercedes this year, although Verstappen did manage to separate Hamilton and Bottas this morning. Alexander Albon went well in FP2, putting his Toro Rosso in fifth, while Alfa Romeo had both cars in the top 10 this afternoon.

Don’t forget to listen to this week’s podcast to hear our thoughts ahead of this race, and check out our predictions for Monaco. You can join us during qualifying and on race day for our live blogs, and let us know what you think through Facebook or Twitter.

Sergio Perez has taken his first race win of the 2022 Formula 1 season after coming out on top in a rain-affected Monaco Grand Prix. On a drying track, the Mexican switched the right tyre […]

Max Verstappen leads the Formula 1 drivers’ championship for the first time in his career after victory at the Monaco Grand Prix this afternoon. The Dutch driver was untroubled at the front of the field, […]

Pirelli has published the selected sets for this year’s Monaco Grand Prix, with most drivers heavily favouring the soft tyres for the race around the streets of Monte Carlo. Most teams have opted for 10 […]