With just six races left in the 2019 Formula 1 season, the paddock heads to Sochi this weekend for the sixth running of the Russian Grand Prix.

The race takes place on a street circuit around the site of the 2014 Winter Olympics.

3 Legs 4 Wheels looks ahead to the 16th race of the year:

2017 race winner Valtteri Bottas started from pole position, but he was immediately under pressure from Lewis Hamilton and Sebastian Vettel. It looked like the Ferrari driver was going to go into the first corner in the lead, but the Briton managed to hold on to the racing line to come out on top.

Vettel did take the lead during the pitstop phase, but once Hamilton had his new tyres up to temperature he was able to comfortably overtake the four-time champion.

Team orders came in to play midway through the race as Mercedes asked Bottas to let Hamilton through, telling the Finn his teammate had blistering on his tyre and needed to protect his lead over Vettel in the championship standings. The move ensured Hamilton took the win, with Bottas second and Vettel taking the final spot on the rostrum.

It was a race to forget for Toro Rosso, with Pierre Gasly and Brendon Hartley both suffering brake failures on the fourth lap of the race, leaving the team with a double retirement. The pair were the only drivers not the finish the race.

The 5.848km circuit features 18 corners and two DRS zones, with the race taking place over 53 laps.

Need to familiarise yourself with the Sochi Autodrom? 🤔

Jump on board with home hero @kvyatofficial as he gives you a detailed guide of the track >> https://t.co/2pDV9mXVOO#F1 #RussianGP 🇷🇺 pic.twitter.com/9qQ1tgvXpA

As it’s a street circuit, there haven’t been any significant changes to the layout, but there have been a couple of minor alterations. A 50mm high domed kerb has been installed on the exit of three turns, while plans for resurfacing part of the track were shelved.

Bottas holds the racing lap record at the Sochi Autodrom, posting a time of 1:35.861 during last year’s race.

Pirelli’s middle three compounds will be in use at this race – C2, C3 and C4. Last year, F1’s tyre manufacturer provided its softest options for this race, so it’s a bit of a change to 2018. 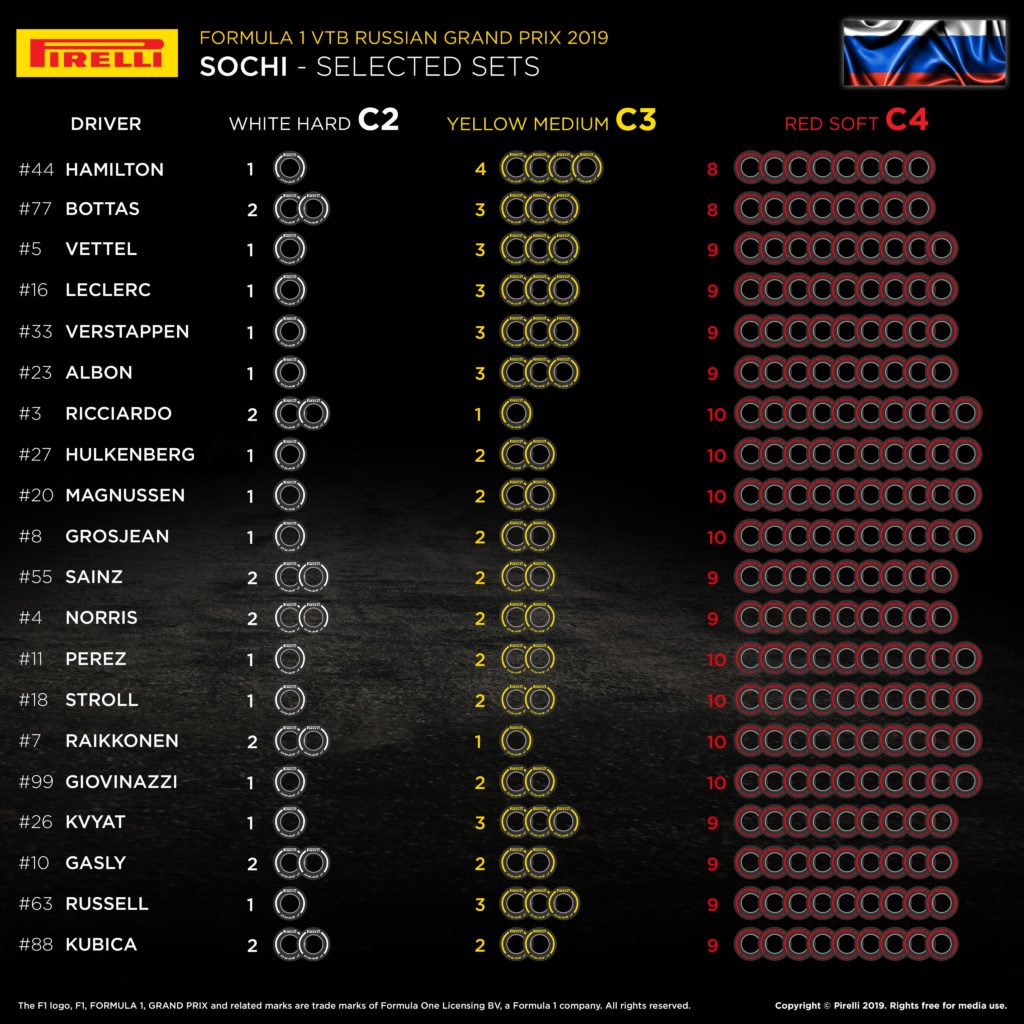 In recent races, Mercedes have typically had fewer soft tyres than their rivals at the front of the grid, but for this race the Silver Arrows will have fewer softs than all the other teams, with the just eight. Their tyre choice means Lewis Hamilton has more medium sets than any other driver on the grid, while Bottas will have an additional set of hards.

Most drivers made just one pitstop last year. Those who started on the softer tyres came in early – all but Kimi Raikkonen stopped within the opening 15 laps. Meanwhile, those who started on the harder compound left their stops late, coming in between laps 32 and 43 to go onto the quicker tyre for the final few laps. Sauber’s Marcus Ericsson was the only driver to try a two-stop strategy, but it didn’t work for the Swede as he finished 13th after starting 10th.

The 2016 Russian Grand Prix should have been one of the best weekend’s of Daniil Kvyat’s career. He arrived at his home race fresh from his second podium at the Chinese Grand Prix, making him Russia’s most successful F1 driver.

However, it all went wrong within a couple of corners as the then-Red Bull driver slammed into the back of Vettel’s Ferrari, causing one of the most expletive-laden pieces of team radio in recent years.

The pair had gone wheel-to-wheel in China in the previous race, with Vettel accusing Kvyat of driving like “a torpedo”. For the Sochi incident, Kvyat received a stop and go penalty during the race, having ended Vettel’s day by causing the crash, but there was further punishment to come as Red Bull demoted him to Toro Rosso before the next race in Spain, putting 18-year-old Max Verstappen in the car instead.

Sochi is a Mercedes track. The German team has won all five previous races in Russia, with Hamilton standing on the top step three times. The current constructors champions also have three 1-2 finishes at this circuit, and just one DNF.

Bottas has shown strong form at this track in the last couple of years, winning in 2017 before securing pole last year, but it’s Ferrari’s Charles Leclerc who comes into this race as the king of Saturdays, having taken pole at the last three races. If he’s quickest in qualifying again this weekend, he’ll be the first Ferrari driver to start on pole in four straight races since Michael Schumacher 2000-2001.

Given Mercedes’s record at this track and the pace Ferrari showed in Singapore, it looks like being a straight shootout between the two. Red Bull don’t typically have their best races in Russia, with the team still looking for their first Sochi podium, although Alexander Albon had his best weekend in F2 at this race last year, winning the feature race before coming third in the sprint.

He’ll need a bit of luck if he’s to finish on the podium again in 2019 though as Honda has announced all four of its drivers (Verstappen, Gasly, Albon and Kvyat) will have new engines for this race, meaning 5-place grid penalties for the Red Bull drivers and Gasly, while Kvyat starts at the back.

Racing Point will be hoping to put their disappointing showing in Singapore behind them at this race, and history is on their side as Sergio Perez has never failed to finish in the top 10 at Sochi, and was on the podium in 2015.

Kevin Magnussen is another driver who typically goes well in Russia, having finished 5th in Sochi during his rookie season with McLaren. However, he and Haas teammate Romain Grosjean have failed to pick up a single point in their last four races, so the Dane could miss out this year.

Don’t forget to listen to this week’s podcast to hear more of our thoughts ahead of this weekend’s race. Enter our podium predictions competition before the start of qualifying and check out who we think could be in the top three on Sunday. Join us for our live blogs during qualifying and on race day, and let us know what you think through Twitter and Facebook.

More mediums for Hamilton in Russia

Lewis Hamilton will have more sets of medium tyres than anyone else on the grid for next weekend’s Russian Grand Prix in Sochi. Pirelli has published each driver’s selected sets ahead of the trip to […]

Mercedes were victorious for the sixth time in six editions of the Russian Grand Prix at Sochi Autodrom as Lewis Hamilton came out on top in the 16th race of the 2019 season. Ferrari looked […]