The 2019 F1 season is now 1/3 of the way through as the circus heads back to Europe for 2nd year of the returning French Grand Prix at the Circuit Paul Ricard at Le Castellet.

Mercedes are going into this race having had one of their drivers on the top step of the podium in all 7 races so far this season and taking another place in the top 2 on 6 occasions with last time out in Canada being the only missed opportunity,

3Legs4Wheels looks ahead to the race

After an incident packed opening lap which left took the French drivers Pierre Gasly and Esteban Ocon out of their home race and also left Sebastian Vettel and Valtteri Bottas needing early pits stops, Lewis Hamilton took an easy and dominant victory ahead of Max Verstappen in 2nd and Kimi Raikkonen in 3rd after he caught and passed the damaged car of Daniel Ricciardo in the final laps.

The race itself finished with a virtual safety car for the last 3 laps after Lance Stroll suffered a puncture with 4 laps to go spreading debris over the track and forcing the then Williams driver into retirement.

Vettel and Bottas managed to make their way back through the field over the 53 laps to finish in 5th & 7th respectively, separated by the strong running Haas of Kevin Magnussen.

Carlos Sainz, Nico Hulkenberg and Charles Leclerc rounded out the points finishers while 5 cars retired, although Stroll and Fernando Alonso (who finished the race in the pits due to suspension damage) were classified in the final standings for completing over 90% of the full race distance.

There are 2 DRS zones on the circuit being used this year, the first has a detection point between turns 6 & 7 which is activated on the Mistral straight leading up to the first chicane, with the second detection zone just before the apex of the penultimate corner (turn 14) with the activation point on the start/finish straight leading up to the 90 degree left hander at turn 1

The circuit is notable for it multi coloured run-off areas where the different colours signify different levels of abrasion where instead of the usual gravel traps seen at most circuits, a mixture of asphalt and tungsten gives the tyres of wide running cars more grip, but at the expense of tyre wear, with the red painted areas being even harder on the tyres,

For 2019 the pit lane entrance is being moved from its previous position on the main straight to between the final 2 turns (14 & 15) to improve safety.

Pirelli has announced that the middle 3 of the compounds will be used this year, C2, C3 & C4, with 5 of the top 6 drivers going for the same strategy with 1 hard tyre, 3 mediums and 9 sets of softs, while Max Verstappen has sacrificed one of his soft sets for an extra set of mediums. 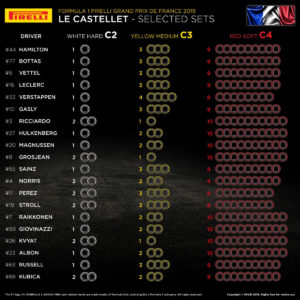 The main strategy in last year’s race was to make 2 stops, with the softest available compound (ultra soft) being able to withstand over half the race distance for some drivers. With the compounds selected being slightly harder this year, we may well see different strategies being used and some teams may opt for a 1-stop race, although it wouldn’t come as a surprise to see 1 or 2 drivers pitting towards the end of the race if a fastest lap bonus point is available.

The circuit was used for the French Grand Prix exclusively from 1985 to 1990 and before that it alternated with the Dijon-Prenois circuit during the 1970s and 80s. But some memorable names have stood on the top step here. Home hero Alain Prost took the chequered flag here in 4 of his 6 French Grand Prix wins and in 1983 he landed home win for a driver and a constructor when he drove his Renault to victory, this was followed by a hat-trick of wins in the last 3 races before the switch to Magny-Cours in 1988, 89 & 90.

In 1985, Swiss driver Marc Surer set an outright speed record at the time of 210mph in his turbo charged Brabham BWM on the Mistral straight, which back then was 1.8Km long before the chicane was added.

It’s very hard to talk form here as this is only the 2nd year that the circuit has been back on the calendar, but going on the previous races this season, it’s very hard to look past Mercedes taking another victory in what could become their most dominant season yet, although Ferrari have showed strong straight line speed this year and some parts of the circuit could play into their hands.

Outside of the top 3 teams, it’s a 6 way fight for best of the rest and Haas will be wanting to bounce back from their disappointing weekend in Canada a fortnight ago, along with McLaren’s Lando Norris who has had 2 retirements in his last 3 races. Renault could be a team to watch out for after their improvement in Canada and the advantage that seems to come with a home Grand Prix.

If you haven’t already, listen to this week’s podcast to hear more of our thoughts ahead of this weekend’s race, and see who we think could be on the podium on Sunday. There’s still time to enter our predictions league, and join us during qualifying and the race for our live blogs. You can get in touch throughout the weekend through Twitter or Facebook.

Max Verstappen recovered from a poor start, passing Lewis Hamilton late on at Le Castellet to secure victory in the French Grand Prix and extend his lead at the top of the drivers’ championship. The […]

Red Bull will have fewer ultrasoft tyres at the French Grand Prix than Mercedes and Ferrari. Pirelli have unveiled the selected sets for the first F1 event in France since 2008, with Red Bull opting […]

Extra mediums for Verstappen in France

Max Verstappen will have different selected sets  of Pirelli tyres to the other front runners for the French Grand Prix later this month. Both Mercedes drivers, the Ferrari duo and Verstappen’s Red Bull teammate Pierre […]