The 2019 Formula 1 season reaches its halfway point this weekend as the Hockenheimring hosts round 11 of 21.

Usually only taking place every other year, the circuit reached a one-year deal to host this year’s German Grand Prix.

Lewis Hamilton heads to this race off the back of his fifth win in six outings, leaving him 39 points clear at the top of the drivers standings.

3 Legs 4 Wheels looks ahead to this weekend’s action:

It was set up to be a strong weekend for home favourite Sebastian Vettel as he started the race from pole position, while a mechanical issue in qualifying left Hamilton down in 14th.

Everything appeared to be going well for the German, but it started to rain on lap 44, resulting in the Ferrari driver losing control two laps later, hitting a kerb and coming to rest in the gravel.

The safety car caused by Vettel’s crash allowed Hamilton, who had been charging through the field, to come in for fresh tyres, promoting him to the front of the field as others also boxed for fresh rubber.

Hamilton decision to come into the pitlane was a late one, with the stewards discussing whether he cut the pit entrance for some time after the race. However, his victory was confirmed around 90 minutes after the chequered flag dropped.

Valtteri Bottas and Kimi Raikkonen joined Hamilton on the podium, while Esteban Ocon and Brendon Hartley were also among the points scorers, despite starting towards the back of the field.

The mixed weather conditions meant some drivers missed out due to the wrong tyre decisions, including Pierre Gasly and Kevin Magnussen, although Romain Grosjean picked up several places in the final few laps despite briefly switching to the intermediate tyre.

This version of the Hockenheimring has hosted F1 since 2002. The 4.574km track is made up of 17 turns, with drivers completing 67 laps.

Seb was born a short drive away from Hockenheim

While the track itself remains virtually unchanged from last year’s race, there have been a few minor changes around the circuit, including the installation of a negative kerb at the entry to turn 13.

There’ll be one fewer DRS zones for 2019, with the pit straight zone removed for this year. That leaves drivers with the option to use DRS between turns 1 and 2, as well as slightly later in the lap between 4 and 5.

Kimi Raikkonen remains the race lap record holder at Hockenheim, setting a time of 1:13.780 with McLaren in 2004.

It looks like teams will be using a range of strategies for this race, with Ferrari seemingly expecting the soft tyre to work better than their rivals at the front of the grid. Renault and Toro Rosso are also banking on the C4 being a strong compound at this race, after selecting 10 sets. 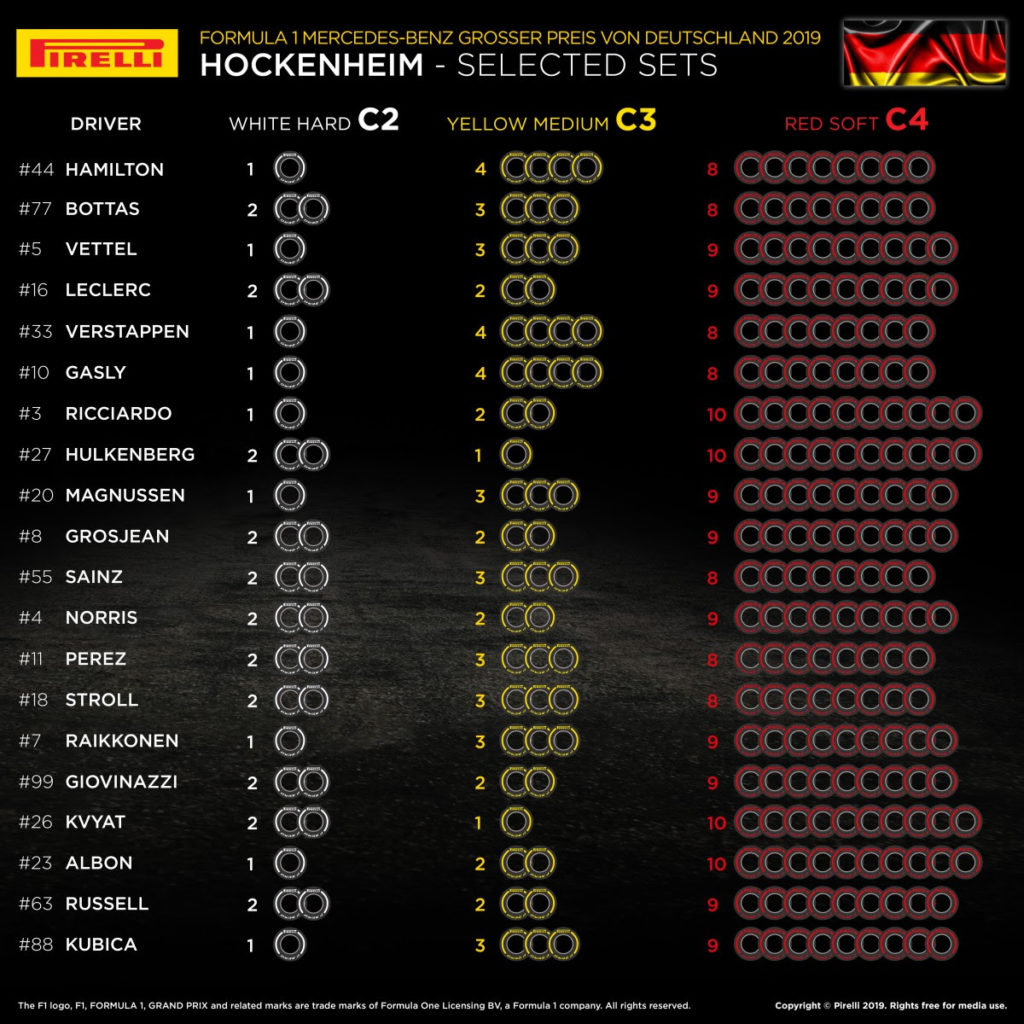 It’s difficult to read too much into last year’s tyre strategies due to the weather, but the drivers who gained the most positions during the race were Hamilton and Ocon, who both made the one-stop strategy work, while several of those who finished in the points needed three trips to the pitlane.

The Brazilian looked like he could be heading for his first race win since suffering life-threatening head injuries at the previous year’s Hungarian Grand Prix, but the barely-disguised team orders meant he was forced to let his teammate through, leaving Massa to settle for second.

The result was the subject of much scrutiny and debate, with some suggesting Ferrari should be disqualified from the race for breaking the then-ban on team orders, but instead the FIA imposed a £100,000 fine.

Only one driver on the current grid has won at the Hockenheimring, with three of Hamilton’s four German Grand Prix victories coming at this track. Vettel is the only other driver to have won in Germany, but his sole victory came at the Nurburgring.

Pole position has resulted in race wins at this track six times in the 11 races since its 2002 redesign, but the current drivers champion proved its possible to win from further down the grid with good strategy and a little luck last year after starting 14th. Hamilton typically doesn’t qualify well at this track, having not outqualified a teammate here since 2008.

If Renault’s bold tyre choice proves the right one, Daniel Ricciardo and Nico Hulkenberg could have a good race, as both appear to enjoy this track, although the Australian will prefer to forget last year’s early engine failure.

McLaren will also be hoping to continue their recent run of form, having had a driver in sixth position for the last three races – a run which has left the Woking outfit 21 points clear of their engine suppliers in the constructors championship.

At the other end of the field, Haas are expecting another difficult weekend after their early double DNF at Silverstone. Kevin Magnussen’s car will feature new aero parts, while Grosjean will have older parts on his car, allowing the team to compare the different specifications. The team have had a four-race run without points.

Don’t forget to check out this week’s podcast ahead of Sunday’s race to hear more of our thoughts, and see who we think could be on the podium this weekend. You can also enter our listeners’ predictions league, and join us during qualifying and on race day for our live blogs. Get in touch on Twitter or through Facebook to let us know what you think of the action.

Lewis Hamilton will start tomorrow’s German Grand Prix from pole position as both Ferrari cars suffered mechanical problems during qualifying at the Hockenheimring. The Mercedes drivers’ time of 1:11.767 put him just ahead of Max […]

Sebastian Vettel smashed the lap record at the Hockenheimring the secure pole position for tomorrow’s German Grand Prix. The Ferrari driver, who is yet to win at the track in his Formula 1 career, set […]

Alfa Romeo’s appeal against 30-second time penalties at this year’s German Grand Prix has been dismissed. Kimi Raikkonen and Antonio Giovinazzi were initially classified 7th and 8th respectively at the chaotic rain-affected Hockenheim event, but […]